Persephone is the current Goddess of Grain & Fertility, daughter of Zeus and Demeter, wife of Hades and Queen of the Underworld. As the Earth Goddesses aren't allowed to have children, Demeter was punished by Gaia and faded away after giving birth to Persephone, leaving her alone in the world. She was first found by Hades, who took her to the Underworld and protected her from harm. Persephone would quickly inherit her mother's power and assumed her role as the Earth Goddess, however, due to willingly eating the seeds from the Underworld Pomegranates, she is tied to the realm, and cannot leave it for more than 6 months. Since then, Persephone's constant transitioning between the world of the living and the world of the dead gave birth to the seasons.

Attack Potency: Multi-Continent level (Without Persephone's presence in it, the earth becomes dry and infertile, and all vegetation withers and dies)

Intelligence: Average. Persephone is very young for a deity, and as such is often naive, innocent and clueless. 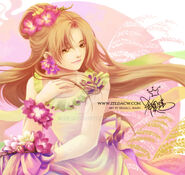 Retrieved from "https://vsbattles.fandom.com/wiki/Persephone_(MYth)?oldid=4121596"
Community content is available under CC-BY-SA unless otherwise noted.