China rained as one of the major superpowers that ended up in the war against the GLA. It used heavy-handed tactics in the war and was a political and economic rival to the US. It is heavily based on the real-life China.

Tier: 7-B (with nuclear weapons)

Age: About 64 years for current government (as of Generals).

Attack Potency: City level with large nukes. Most normal forces arer are around Small Building to Large Building level with powerful units like tactical nukes being around City Block to Multi-City Block level.

Power Source: Most power is generated by nuclear power plants.

Industrial Capacity: Being the most heavily populated country on Earth with heavy nationalism acquisition of troops and military resources is not usually an issue.

Military Prowess: Has about 2.3 million troops.

Notable Individuals: Presumably has leadership similar to real-life China. General Shin Fai is known for having well trained and armed infantry and for preventing the Taiwan Conflict of 2009 from becoming a global war. General Ta Hun Kwai ia known for use of tank divisions. Tsing Shi Tao over-headed nuclear research and casually deployed nuclear weapons. General Leang is a mysterious high-ranking general that uses not only Chinese weapons but also weapons confiscated from USA and GLA. Lin Zhong was a senior intelligence officer.

Weaknesses: Dependent on power infrastructure and most members have normal human weaknesses. 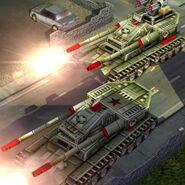 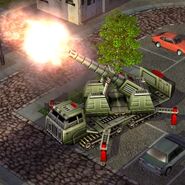 Add a photo to this gallery
Retrieved from "https://vsbattles.fandom.com/wiki/People%27s_Republic_of_China_(Command_%26_Conquer)?oldid=4625695"
Community content is available under CC-BY-SA unless otherwise noted.