Note: This profile will be subject to revision in the near future. Until the revision is completed, it is not advised that users create VS threads featuring this character. 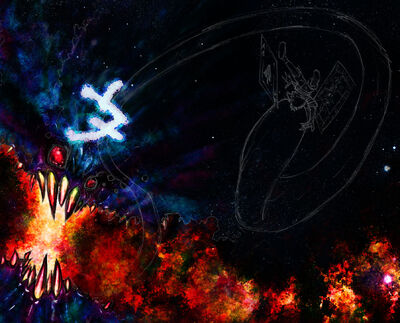 IT is an extra-dimensional being born from the Macroverse. It arrived on Earth during prehistory as a massive, cataclysmic meteor-esque impact, settling in the area that would become Derry, Maine. There, It arises every 27 years to prey on anything nearby, causing a cycle of extreme violence every three decades.

Name: "IT", The Spider, The Deadlights, Pennywise the Dancing Clown, Robert Gray

Gender: Inapplicable, but appears male in his avatars

Powers and Abilities: Superhuman Physical Characteristics, Reality Warping, Immortality (Types 1, 3 and 9), Regeneration (Low-High), Shapeshifting, Invisibility, Illusion Creation, Teleportation, Telepathy, Mind Manipulation, Spatial Manipulation, Biological Manipulation and Disease Manipulation (Stated that it could point at victims and grant them diseases, as well as make a person's tongue run with pus in the same manner), Blood Manipulation, Possession, Weather Manipulation, Technology Manipulation (Can turn on lights and switch on devices such as televisions without being in the same room as them. Far superior to other psychics who are capable of tricking video surveillance devices, causing highly advanced computer technology to critically fail, and fooling telemetry specifically designed to monitor and detect any and all psychic output.), Madness Manipulation (Type 3; Can show a victim its true form in the Deadlights by making eye-contact.), Acausality (Type 4), Perception Manipulation (Can make itself perceived differently by different people at the same time), Immersion (Appeared inside of a television, holding the severed head of a TV actor.) | Same as before but on a greatly enhanced scale, Immortality (Type 10), Regeneration (High-Godly), Non-Corporeal, Beyond-Dimensional Existence (Type 2), Large Size (Type 11), Transduality, Madness Manipulation (Type 3; A single glance at its true form drives victims so insane that they suffer an instantaneous death. One particular victim experienced such an extreme reaction that spurts of blood discharged from his brain when he died), Absorption (Can make things permanently part of the Deadlights), Soul Manipulation (Keeps the souls of all it has killed in the Deadlights. Pulled Bill's mind and soul out of the universe and dragged it towards its true form.)

Attack Potency: Varies from Wall level (All of its weakest avatars are at the very least capable of ripping humans apart) to at least Large Mountain level+ (Upon its death, the avatar most closely resembling Its true form caused an earthquake of at least this magnitude), likely higher (Said earthquake was far superior to the strongest earthquake in recorded history, which various studies have placed at 9.4 to 9.6 on the Moment Magnitude scale) | Outerverse level (Exists outside of the Dark Tower in a void beyond that which Maturin resides in; Maturin himself exists in a void which lacks physicality/direction and predates both the concept of time and the multiverse's existence as a whole)

Speed: Subsonic (As fast as a bullet train) | Irrelevant, likely Omnipresent within the Deadlights

Durability: Varies from Wall level to at least Large Mountain level+, likely higher. Regeneration makes it difficult to kill (It's implied to have survived its "death" during the events of the novel at the end, and in further Stephen King works) | Outerverse level

Weaknesses: It underestimates and scorns humanity, considering them weak and toying with them. It makes mistakes and does illogical things fairly regularly. It is sensitive to psychic energy, so collective belief and courage can overcome it. When It transforms into a shape, it must comply with the laws of that shape. It goes into hibernation for 26-27 years between cycles, and during that time, it is vulnerable to attack. | None notable

Note: Not to be confused with the movie version and should be treated as different characters.