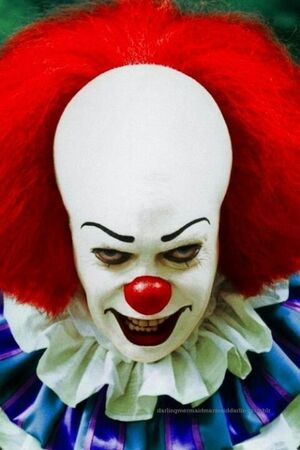 Pennywise, better known as IT, is a malevolent supernatural entity that resides in Derry, Maine, and has existed for numerous centuries. IT uses people's fears (mainly children) against them in order for IT to feed on them.

Name: IT, Pennywise the Dancing Clown, Eater of Worlds

Powers and Abilities: Superhuman strength and speed, Immortality (Types 1 and 2 normally. Type 7 as a skeleton or a mummy), Regeneration (At least Low-Mid over time. Was capable of regenerating scarred tissue and a missing chunk of IT's head during hibernation), Body Control, Natural Weaponry, Telepathy (Is capable of reading one's mind to either learn their fears or communicate with them), Telekinesis, Acrobatics, possibly Self-Sustenance (Type 1. As a skeleton, was able to stay underwater for an unknown period of time), Smoke Manipulation (Can cause a dense fog to appear at will), Social Influencing (As Pennywise, IT is capable of luring in children. Convinced Henry Bowers to hunt down and attempt to murder the Losers Club), Shapeshifting (Is capable of transforming into any fear a person may have, such as a werewolf, a mummy, a skeleton, a dog, a dead relative, etc.), Blood Manipulation, Reality Warping, Sound Manipulation (IT is capable of mimicking anyone's voice), Electricity Manipulation (Caused a power outage in the Derry Town House), Invisibility (Can only be seen unless IT chooses that it can be seen), Perception Manipulation, Creation (Can create hordes of balloons out of thin air), Illusion Creation, Immersion (Can enter photographs and interact with the surroundings and is also capable of leaving photographs to attack), Memory Manipulation (Caused the Losers' Club to forget moments in Derry), Teleportation, Possession, Weather Manipulation (Can cause storms), Web Creation, Age Manipulation, Mind Manipulation (Those who look into the Deadlights "want to be in them"), Light Manipulation, Madness Manipulation (Type 3 with the Deadlights), Paralysis Inducement (With the Deadlights)

Attack Potency: At least Street level (Is capable of easily murdering people), likely Wall level (Can casually open a giant hole in the floor. Tore off Georgie's arm. IT's "true form" should be this powerful via sheer size)

Lifting Strength: At least Regular Human (Was effortlessly able to pick up Eddie)

Durability: At least Street level (Was killed by The Losers Club, a group of average humans, in IT's final form), likely Wall level

Weaknesses: IT is cocky and arrogant. IT relies on the fears of IT's victims, so if they aren't afraid, IT can't harm them. IT can be mortally injured if struck in the Deadlights.

Note: Not to be confused with the book version or the movie version and should be treated as different characters.