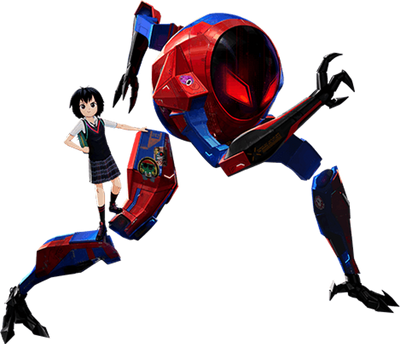 Peni Parker is one of the main protagonists of the movie "Spider-Man: Into the Spider-Verse." In the movie she is sucked into the world of Miles Morales and ends up teaming with the rest of the characters in an effort to go back to her futuristic life.

Powers and Abilities: Genius Intelligence, Vehicular Mastery, Telepathy, Hacking, Precognition via Spider-Sense, Stealth Mastery, Likely an Adept Fighter | Same as before, with Web Creation, Surface Scaling, Possibly Camouflage (When first meeting Miles she was shown to blend in with the roof to hide herself, but this may just be because there was no light)

Attack Potency: Unknown (Has never shown any feats outside of her suit, though she injured Scorpion by hitting him with one of SP//DR's legs) | Small Building level (Has been shown to be comparable to the rest of the cast and is able to take down villains who could hurt Miles)

Speed: Unknown, likely Supersonic (Is comparable to Gwen Stacy, who outpaced a bullet to save her father's life)

Striking Strength: Unknown | Small Building Class (Is comparable to the other Spider-People)

Durability: Unknown | Small Building level (Is shown to be comparable to the rest of the main cast)

Stamina: Likely superhuman physically, possibly limitless with Spider-Suit (Is controlling a robot that appears to have no need for fuel of any kind)

Intelligence: Extraordinary Genius (Other than being an expert in stealth and possibly fighting, she is considered a genius in the future which has been shown to be extremely advanced on its own, is able to effectively hack while being shot at, is comparable to her father who made the Spider-Suit, and is able to operate the suit which is implied to be futuristic even for it's own time)

Weaknesses: Piercing weapons have been shown to work effectively against SP//DR and is able to be rendered useless once hit in the right spot.