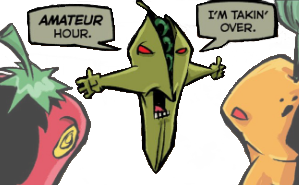 One of the members of the Brotherhood of Evil Produce. He believes that Phantom Carrot isn't fit to be leader and defeated him to take his place. But before he could do anything his position was taken by Romaine Gladiator, who revealed that he captured Agent Kosher and that he's in charge.

Powers and Abilities: Superhuman Physical Characteristics, Low-Mid Regeneration (Regains his peas immediately after shooting them) and Body Control (Can shoot his own peas as projectiles)

Range: Below standard melee range to several meters with Peas

Weaknesses: Possibly still edible by stronger than 9-B opponents