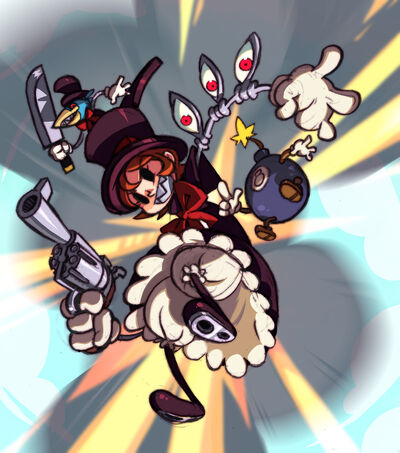 Once a war orphan slave named Patricia, Peacock’s body was gruesomely mutilated by slave traders that captured her. She was rescued by Dr. Avian’s Anti-Skullgirls Labs, and rebuilt with a reality-defying arsenal of biomechanical weaponry: the Argus System augmented her body, and the Avery Unit gave her access to unprecedented weaponry.

Alas, they couldn’t do anything for her mind: Peacock’s damaged psyche and abiding love of cartoons shaped her new “toys” into a terrifying gang of cronies, who she has no qualms using to paint the town red… with blood. Terrifying as she is, she may be the kingdom’s best bet against the Skullgirl.

Tier: At least 8-A, potentially higher

Attack Potency: At least Multi-City Block level (Described by WoG as being potentially one of the most powerful of the main cast, Defeated Filia (Which is backed up by official art), Ms Fortune, and Parasoul, Valentine, Double twice, and the Skullgirl in her storyline, Due to having two Synthetic Parasites she should be comparable to Painwheel), potentially higher (She has yet to unlock the Avery Unit's true power, though how powerful this would make her is unknown)

Speed: Hypersonic (Outran an explosion from its point of detonation, has small jets under her dress that she can use to move at extremely high speeds)

Intelligence: Above Average (She is highly skilled in combat and is able to create sentient beings using just her imagination, but she is also insane), Extremely high concerning cartoons (Watched and memorized every cartoon ever)

Weaknesses: Hasn't unlocked the Avery Unit's true potential, Arrogant (Considers herself to be the strongest person ever), Tends to make rash decisions without thinking things through