The witch of class presidents. Her nature is an idle onlooker. She spits out spider-like thread to create a school all for herself in her barrier’s sky. This witch was very plain even in her previous life, with her only strong point being how conscientious she was. She still detachedly plays out an ordinary, everyday life– hardly any different from before, hardly even any fun– with the familiars that she puppets around. If you ring the end-of-school bell, this witch will likely return to her home somewhere. Humans who lose their way in her barrier will fall ever downward, until they eventually melt into empty sky and become nourishment for the witch. Unless you’re a particularly fearsome outsider who disrupts her daily life, the witch will rarely take action herself. - Magia Record Description.

The class representative witch. Her nature is to remain an onlooker. Using the spider like threads which she vomits forth, she created a school for herself alone within the sky of her barrier and endlessly acts out an ordinary daily student life there. If you ring the going-home bell, this witch will likely return to her house somewhere. - Witch Card Description.

Minions of the witch of class presidents. Their role is to be classmates. They glide elegantly along the threads with their skates, but they have no will of their own. The witch is merely controlling them with her threads. For the witch, whose gaze was always cast down at her feet, her classmates may as well have been pairs of disembodied legs. The blouses from her minions’ uniforms are therefore unneeded, so they’re hung up to dry throughout the barrier. The barrier of the witch– who was always looking at the sky outside– may seem too wide and barren to be a classroom, but since her minions are wearing indoor shoes, it seems to still technically count as one. - Magia Record Description.

The class representative witch's minions. Their role is to be her classmates. Although the skates on their feet allow them to glide gracefully along the threads, all of them are actually controlled by the witch using her threads, and they have no will of their own. - Witch Card Description.

Name: Her magical girl name is unknown, her familiars’ name is Mathieu. Class Representative Witch, The Witch of Class Presidents

Powers and Abilities: Superhuman Physical Characteristics, Self-Sustenance (All types), Large Size (Type 0), Immortality (Types 2, 6 and 7), Magic, Energy Projection, Weapon Creation (Specifically she can create chairs), Statistics Amplification, Healing (Mid level, scaled from Corbeau), Telepathy, Telekinesis, Transformation, Reactive Power Level (Gets stronger when critically damaged), Extrasensory Perception, Power Bestowal, Pain Inhibition, Thread Manipulation (Spews out threads by vomitting, she can also alter said threads to create objects such as school buildings), Mind Manipulation, Pocket Reality Manipulation, Familiar Summoning (Her stronger familiars also have Body Control, Flight, and Regeneration Mid-level as shown in Battle Pentagram), Weather Manipulation and Sound Manipulation (Her death results in her once blue sky suddenly and heavily rain, with the sound of an airplane crash in the background), Absorption (Her barrier has the ability to incoperate the bodies of her victims that fall into the depths of her barrier), Invisibility, Reality Warping, Curse Manipulation, Self-Resurrection (Able to resurrect from her Grief Seed, although this isn't applicable for combat unless the Grief Seed is filled with despair), Portal Creation. Resistance to Magic, Mind Manipulation, Life Absorption, and Status Effect Inducement, Immunity to Soul Manipulation (Lacks a soul).

Attack Potency: City level (Created a pocket dimension containing a sky and her death results in the sudden formation of rain clouds.)

Durability: City level (Was killed by an inexperienced Homura without most of her military technology, but should be strong enough that Homura would need her homemade bombs to kill. Should be superior to Oktavia.)

Range: Interdimensional (Every witches are capable affecting people outside of their own labyrinth, which located on different dimension from the real World).

Weaknesses: Unless there is an actual threat, she tends to stay back. 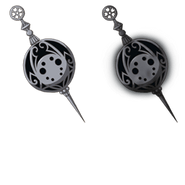 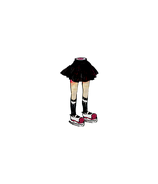 Mathieu, her familiar.
Add a photo to this gallery