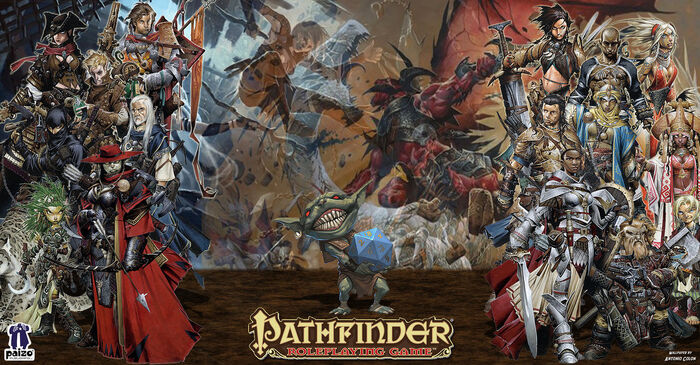 Pathfinder is a tabletop RPG released by Paizo as an evolution of Dungeons and Dragons 3.5. Players create characters in a world beset by magic and evil, while the GM plays the other characters and world; hostile or friendly: that the players' characters interact with. While the game encourages imagination and for the Game Master to invent new worlds and characters for the characters, who in turn are unique creations of the players, to explore, there is a iconic world that much of the games canonical story takes place in.

During the first age, the Age of Creation, was Golarion first formed by the many gods, and shortly thereafter did the Great Destroyer God Rovagug seek to end the world and all of creation. The other gods formed an alliance and ultimately put an end to Rovagug's rampage before he could destroy as he saw fit, with the righteous goddess Sarenrae casting him into a pit sliced into the material plane, and the archdevil Asmodeus sealing him within using a god-binding key. Since then, mortals have arisen and grown into what is now civilization on the face of Golarion, their many triumphs, tragedies, and intrigues shaping the eight continents into a land rife with adventure. In time, many adventurers banded together to share stories, advice, and resource, and created a base of operations in the central city of Absalom. This would before long become the Pathfinder society, with thousands of Pathfinders exploring the world and getting things done for the guild.

While many of the world's creatures are fairly weak, with sub-human to peak human threats occupying many of the lower echelons of power in the world, monsters and notable characters that possess considerably greater levels of power exist. Many characters can dish out and deal quite a bit of punishment, and even early it is possible for characters to achieve bullet-timing and beyond speeds. Mythic characters possess far greater power than even this, and the deities of the verse possess far more than even that. Hax of all sorts abounds in this verse, primarily through the use of magic and various spells.

A map of Golarion: 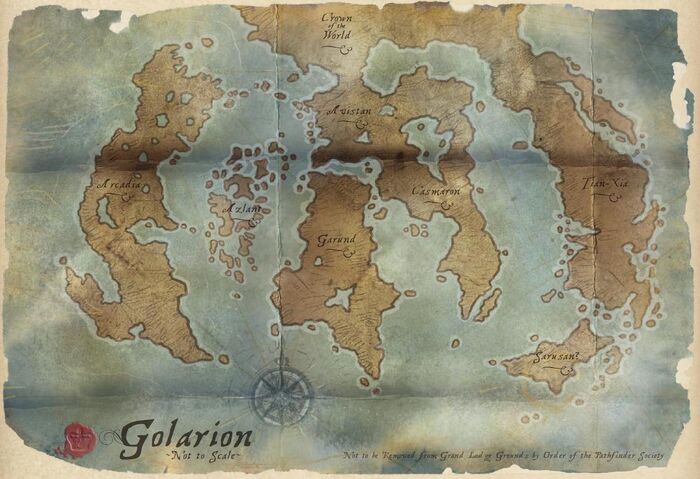