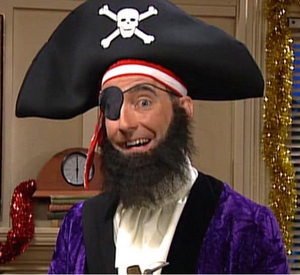 He resides in a small home in Encino, California. His bedroom is filled with SpongeBob-themed items such as plush toys, collectibles, bedspreads, and pillows. He also wears SpongeBob underwear. He co-hosts specials with his pet parrot, Potty, a string puppet whose strings are clearly shown and is known for being poorly controlled by the puppeteer. They tend to not get along, such as in "Ugh," where they fight over whether prehistory or the future is better.

Powers and Abilities: Superhuman Physical Characteristics, Regeneration (High-Mid, regenerated from his head twice), Immortality (Types 2 and 3), Underwater Breathing (Type 2, can breathe underwater perfectly fine), Toon Force, Flight, Weapon Mastery (Can utilize a sword and a cannon), Vehicular Mastery (Can pilot several boats that would require dozens of men to use by himself, and even drive them on land), Plot Manipulation (Was able to change the ending of an episode just because he didn't like it), Causality Manipulation, Immersion (was able to send a letter to SpongeBob, who is a fictional character in his universe), Time Travel (Traveled to prehistoric times, as well as several other past events), Dimensional Travel (He has traveled into different entire universes), Time Stop (seen here), Broadway Force, Light Manipulation/Darkness Manipulation (His TV remote can somehow turn the lights on or off in a building), BFR Via time travel or dimensional travel, Fourth Wall Awareness (Regularly interacts with the audience), Hammerspace (Can summon random items from thin air, such as a wooden club), Extrasensory Perception (Saw what spongebob and Patrick we’re doing by looking at a picture), Time Manipulation (Reversed his actions after he wrecked his house), Extreme Pain Tolerance (Had his entire body blown up, save for his head, and was only impressed by it. Was repeatedly bitten by a tyrannosaurus rex and it only tickled him), Resistance to Time Stop (Can move when time is frozen)

Attack Potency: Small Town level+ (Can trade blows with Potty the Parrot, who is able to harm him)

Speed: Subsonic (In Party Pooper Pants, he ran from the end of his neighborhood to his house in two seconds, He dug a several foot hole in seconds) with Relativistic reactions (Easily dodged laser fire in Ugh)

Lifting Strength: Class 10 (Should be comparable to Cavey, who effortlessly threw a large boulder which weighs this much)

Durability: Small Town level+ (Survived getting launched from Bikini Atol to Encino which provides this much energy, Endured being shrunken into Encino and getting crushed by a giant Potty, Had the entire city of Encino land on top of him and survived, Was tossed through dozens of houses and got hit by a pole afterward. Survived being launched into the atmosphere by a cannon and landing on a building, causing it to sink. Was repeatedly bitten by a tyrannosaurus rex much stronger than him, but it only tickled him)

Stamina: Incredibly high (Can still go on even after having several wounds and burns all over him. In Atlantis SquarePantis, he survived being stranded in the middle of nowhere while suffering from extreme hunger and dehydration)

Range: Standard melee range, Extended melee range with his sword and club, At least Hundreds of meters with a Cannon, Kilometers with his Pirate Ship. Universal with Time Manipulation

Standard Equipment: His hook hand, his peg leg, A sword, A wooden club, An Anchor, A Cannon, His remote, his car, A small boat

Intelligence: Below Average (He can be gullible, stubborn and childish. Does not usually think plans through, and often has things backfire on him, However, he has shown some levels of intelligence at times, like running a Live TV show involving several celebrities by himself, Found several Spongebob treasures from around the world, Can pilot a Large pirate ship all by himself, Seems to be an actual pirate and has been one since he was a child, and has worked together with the cast from Big Time Rush to solve riddles on a map leading to treasure)

Weaknesses: Is very naive, cowardly, and to some extent, selfish. Short-tempered. Very emotional (in The Sponge Who Could Fly, he threw a fit when he thought the lost SpongeBob episode was "just a bunch of cheap walk cycles" and threatened to run away).

Note: Given that Patchy is not a combat-oriented character and has never fought in any canon source, it is impossible to say that his abilities have offensive usages that he has never displayed within his own series or to even say how he fights. As such, one should not create Versus Threads involving this character.

Start a Discussion Discussions about Patchy the Pirate