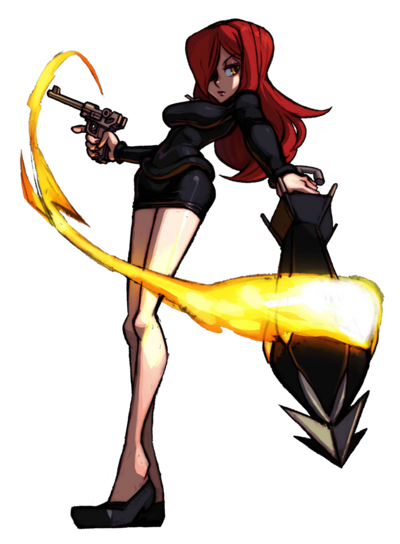 Few know the terrors of the Skullgirl as intimately as Parasoul does: seven years ago her own mother became the Skullgirl that nearly destroyed the world. This tragic past has made her fiercely protective of both her country and her family, and these two priorities frequently come into conflict.

Parasoul is now the crown princess of the Canopy Kingdom and leader of its elite military squad, the Black Egrets. Wielding the living umbrella, Krieg, she fights with grace, poise and cunning to defend her family honor and destroy the Skull Heart so no one can repeat her mother’s terrible mistake.

Classification: Human, Princess of the Canopy Kingdom, Commander of the Black Egrets

Speed: Hypersonic (Kept up with Valentine in single combat)

Intelligence: Very High (Parasoul is a highly skilled tactician, singlehandedly ruling the Canopy Kingdom and commanding the kingdom' elite military squad the Black Egrets. She is also a highly skilled swordsman and combatant, having centered her entire childhood around becoming a warrior that was worthy of her father's legacy, and her adolescent and current life towards training further in order to protect her family to prevent the tragedy that befell her mother from happening again. She is a strategic fighter, keeping her opponent at bay with a variety of ranged moves and utilizing Black Egrets to the fullest in her fights. Her graceful, cunning fighting skill is so great that she was chosen by the Living Weapon Krieg to be the one who wields it in combat)

Weaknesses: Loses composure if someone belittles or threatens her family