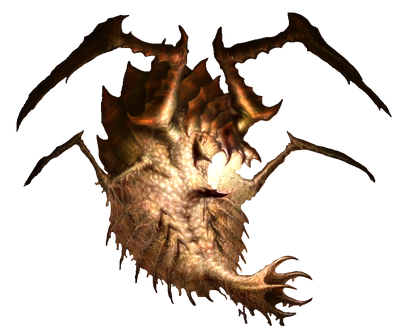 Powers and Abilities: Superhuman Physical Characteristics, Adaptation (Not combat applicable, takes three generations to adapt), Energy Projection, Radiation Manipulation (Fires off massive radioactive blasts, leaks massive amounts of radiation), Absorption (Would absorb the energy from the nearby nuclear reactor), Summoning (Two Parasite Queens that escaped managed to give birth to hundreds of Parasites from their tails), Corrosion Inducement and Acid Manipulation (According to the scans, the Parasite Queens released an acid that would corrode any known alloy), ignores forcefields. Resistance to the following: Radiation Manipulation, Ice Manipulation, Heat Manipulation, and blunt attacks (See note)

Attack Potency: At least Town level (Considered to have "weapon grade" attacks when scanned by Samus Aran, killed several of the Space Pirates on the ship with ease)

Speed: At least Massively Hypersonic+ (Contended with the Space Pirates for a very long while)

Lifting Strength: At least Class 10 (Can lift itself during the battle against Samus Aran, despite only having a few tendrils available to do so)

Striking Strength: At least Town Class (Some had directly fought the Space Pirates in combat, as shown by the corpses littered around the base orbiting Tallon IV)

Durability: At least Town level (Had survived battle with the Space Pirates above of the Frigate Orpheon, forcing many to escape in the battle despite originally having a massive numbers disadvantage, however many died in the process)

Stamina: Unknown, possibly Superhuman (Managed to survive the horrible Phazon experiments inflicted onto them, some manage to continue to attack despite losing limbs. Heavily enhanced by Phazon)

Range: Several meters from sheer size, several dozens of meters with Energy Projection and Radiation Manipulation, much higher with Summoning

Intelligence: Likely brutally animalistic (Lashed out against both the Space Pirates and Samus Aran due to their violent nature, but as shown with the fight against Samus, they seem to know how to use their environment to protect them

Weaknesses: Her mouth is more vulnerable to attacks than the rest of her body

Note: It is unknown what Parasites were used to make the Parasite Queen, thus, all the resistances post-Radiation Manipulation should be seen as possibilities rather than confirmed.

Retrieved from "https://vsbattles.fandom.com/wiki/Parasite_Queen?oldid=5964018"
Community content is available under CC-BY-SA unless otherwise noted.