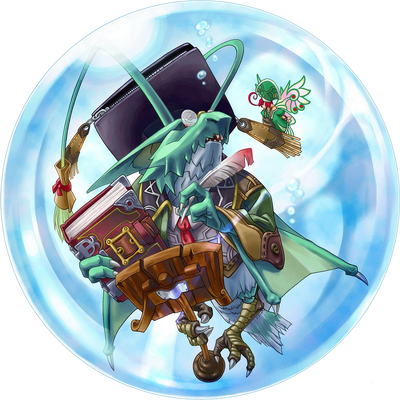 Dr. Paradigm (Dr. パラダイム, Dokutā Paradaimu) is a character in the Guilty Gear series, who made his first appearance in Guilty Gear 2: Overture. He is the leader of Ganymede, a colony in which Gear reside peacefully away from humans.

Name: Doctor Paradigm, Bird (He hates being called this)

Attack Potency: Universe level (Kept up with Valentine and won. He and Dizzy fried Chronus who is likely comparable to That Man in power inside Justice's body. Kept up with Sol Badguy. Chronus' dialogues suggest that he and Paradigm are rivals. His summons alone troubled Ky)

Speed: At least Massively FTL+, possibly Immeasurable (Kept up with Valentine and Sol. Able to move in Underworld Hill, a place beyond time)

Range: Tens of meters normally, Thousands of kilometers with attacks, Cross-Dimensional with Teleportation.

Intelligence: Extraordinary Genius. He has devised several new Theories/Spell Formulas from his research on the the Backyard that exist well outside the standard 12 Steps of Magic. He also created his Research Scores based on his examination of the Cube, Magic Notes that are so powerful that they can easily rival and even exceed the Six Forbidden Magics. Has intellect and knowledge far greater than the entirety of United Nations. Has comparable knowledge to Chronus and managed to deceive him.

Weaknesses: If he revive too often, his soul will be destroyed. Prideful, though this isn't much of a problem in Xrd.

Retrieved from "https://vsbattles.fandom.com/wiki/Paradigm?oldid=5463163"
Community content is available under CC-BY-SA unless otherwise noted.