VS Battles Wiki
Register
Don't have an account?
Sign In
Advertisement
in: Undertale, Characters, Male Characters,
and 19 more 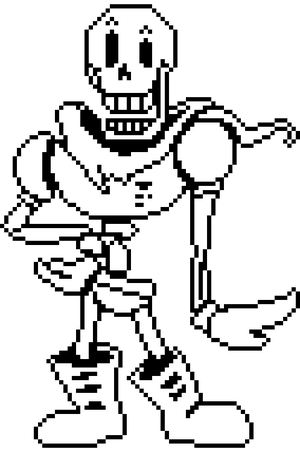 Papyrus is Sans' younger brother and one of the two guards of Snowdin Village. Energetic, naive, and optimistic to a fault, he constantly attempts to capture Frisk in hopes of becoming a member of the Royal Guard and thus popular amongst the residents of the Underground. His brashness belies his incredible kindness, and he ultimately attempts to befriend Frisk on every route to varying degrees of success.

Name: Papyrus the Skeleton, THE GREAT PAPYRUS (only referred to as this by himself)

Age: Likely in his teens to early 20s (Papyrus' username on Undernet is "COOLSKELETON95," which would make him between 15 and 25 due to the game taking place in the year 201X)

Powers and Abilities: Superhuman Physical Characteristics, Inorganic Physiology (Every monster in the game is stated to be made of magic), Non-Physical Interaction (Magic is shown to be capable of harming ghosts, as shown in the Mad Dummy fight where magic attacks are the only way to harm him as opposed to physical attacks), Magic, Levitation, SOUL Manipulation (Can injure the SOUL through damaging the body with their regular attacks) and SOUL Absorption (If a monster defeats a human, they can take its SOUL) Gravity Manipulation, Bone Manipulation, Blue attacks, Danmaku, Large amount of willpower, Limited Power Sensing (Senses the Annoying Dog's power, even over the phone), Resistance to Cold, SOUL Manipulation (Can take SOUL attacks as physical ones) and Radiation Manipulation (Gamerblood Energy Drink, an energy drink containing radioactive waste, is considered a normal product in the Underground)

Attack Potency: Wall level (Stronger than many members of the Royal guard and is likely comparable to hotlands monsters such as Tsunderplane who scale to their own explosives. Has fought and trained with Undyne who acknowledges him as a physically powerful opponent), likely higher via the Special Attack (Papyrus states that Frisk would have been blown to bits if he had used his Special Attack), can bypass conventional durability via SOUL Magic

Speed: Transonic combat speed (Superior to the other Snowdin monsters and should be comparable to Greater Dog's attacks. Gave Undyne a considerably difficult fight during training)

Durability: Wall level (Papyrus has a defense value of 20, which should provide a large boost to his natural defenses)

Stamina: Relatively high, though he can tire rather quickly if he overexerts himself

Intelligence: At least Above Average, was trained by Undyne so much so that they ended up doing even the most trivial things such as practicing jumping out windows, can read and understand books made for smart people, goes through fighting scenarios in his spare time, knows enough about photoshop to make this image (mentioned in Hotland), and Undyne saw him fit to train Alphys. However, he can occasionally lack common sense such as when he mistook a rock for Frisk

Weaknesses: Too kindhearted to actually hurt anyone (Note that this puts the limitations of his given feats, especially in comparison to other monsters such as Undyne (She remarks that he is extremely strong, even by her standards, but wouldn't hurt a fly, hence why she keeps putting off his desire to join the Royal Guard) in perspective, as we've never seen Papyrus actually trying to KILL someone, merely capture them alive), Lacks common sense. If he's not determined to kill his foes, and is facing against a foe with a strong soul and has murderous intent, his defenses will weaken 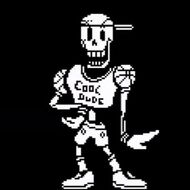 The clothes Papyrus apparently always wears underneath his regular clothes. 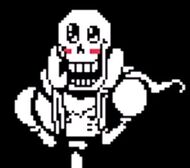 How can you say 'no' to this face?

Papyrus demonstrates his ability to use Blue Mode in order to add "weight" to his enemy's soul and restrict their options for movement. 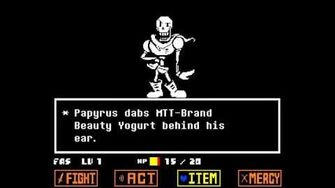