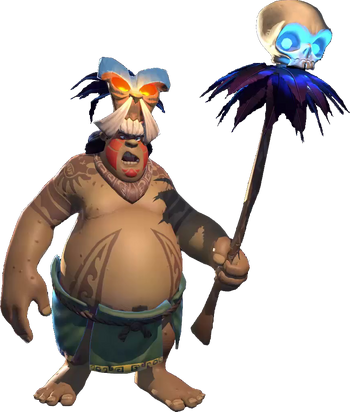 Papu Papu is the leader of the tribe of N-Sanity Island. He and his tribesmen are neither on Crash's or Cortex's side, but they are very violent and will attack anything that wanders into their territory.

Powers and Abilities: Superhuman Physical Characteristics, Vehicular Mastery (Competed against Crash in Crash Team Racing), Summoning (Can summon concrete crates and weak duplicates of whoever he's fighting), Explosion Manipulation via TNT crates, Forcefield Creation (Can create a barrier of fire around himself), Can create shockwaves strong enough to pulverize concrete

Speed: At least Supersonic+ combat and reaction speeds (Shown to be able to tag Crash Bandicoot with his attacks, stated in CTR that other characters race slow compared to him)

Lifting Strength: Peak Human (Can swing around his staff with ease)

Durability: City level (Can tank explosions from TNT crates, can survive Crash throwing a concrete crate at him so hard the crate was pulverized, Aku Aku stated that Crash's body attacks won't work on him)

Stamina: High, never shown to be pushed to exhaustion until he was defeated, can tease Crash even after multiple bombs have exploded in his face

Intelligence: Surprisingly high for a native. Has been a tribal leader for many years and has proven to be a threat to Crash Bandicoot every time they fought. Despite being a native, he is able to operate a race car. He is also bilingual, able to speak English (albeit, he speaks in third person with broken grammar) as well as the language of his tribe. However, his arrogance can make him appear foolish at times (ex; mocking Crash after he just made multiple bombs explode in his face)

Weaknesses: His arrogance may leave him vulnerable, he also has a short temper.

Retrieved from "https://vsbattles.fandom.com/wiki/Papu_Papu?oldid=5676303"
Community content is available under CC-BY-SA unless otherwise noted.