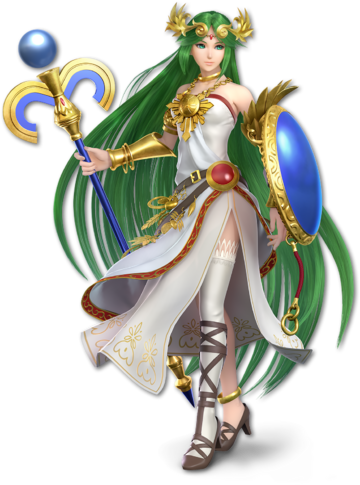 Palutena is the wise and benevolent Goddess of Light and the protector of the Human World. In the first game, Palutena was captured by Medusa, Goddess of Darkness and the ruler of the Underworld, but was freed thanks to the efforts of a young, brave flightless angel named Pit, whom she soon named the Captain of the Guard. By the time of Kid Icarus: Uprising, she has become much more proactive in her role as the defender of humanity, bestowing Pit with numerous powers and weapons and guiding him to victory against the neverending series of threats to the peace of Angel Land.

Powers and Abilities: Superhuman Physical Characteristics, Immortality (Types 1, 2 and 4), Self-Sustenance (Type 1), Magic, Flight, Weapon Mastery, Expert Hand-to-Hand Combatant, Magic, Light Manipulation, Fire Manipulation, Power Mimicry (Power Thief allows Palutena to temporarily steal the powers of others, allowing her to use them while preventing them from using their own abilities), Black Hole Creation, Death Manipulation (Can inflict instant death with Instant Death Attack), Poison Manipulation, Breaking the Fourth Wall, Teleportation, Energy Projection, Status Effect Inducement, Petrification, Telekinesis, Statistics Amplification, Transmutation (Can turn her foes into eggplants, tempura, and idols), Invisibility, Intangibility, Limited Power Nullification with Interference (Can plant a beacon that disrupts enemies' ability to use Powers like those she grants), Forcefield Creation, Attack Reflection, (Can generate a forcefield that reflects all projectiles except for her own), Healing. Resistance to Soul Manipulation (Despite having her body placed under its complete control, Palutena managed to resist the Chaos Kin's attempts to devour her soul for three years)

Attack Potency: At least Island level+, likely Multi-Solar System level (At least as strong as Pit, can casually one-shot boss monsters, should be comparable to Medusa, the cannon charged with her power was able to incapacitate Hades)

Speed: Massively FTL+ (Comparable to Pit, who can evade attacks from Pyrrhon and The Great Sacred Treasure.)

Lifting Strength: At least Class T with telekinesis (Is able to move all of Skyworld if she wishes)

Durability: At least Island level+, likely Multi-Solar System level (Palutena has taken blows from Pit, but the latter has to be careful in order to avoid killing her while fighting the Chaos Kin)

Stamina: High (Can casually kill boss monsters that Pit takes a significant amount of time to defeat and has fought Pit in combat without tiring)

Range: Extended melee range normally, hundreds of kilometers with projectiles (Can fire a beam that reached the Human World despite remaining at her post in Skyworld)

Intelligence: As the Goddess of Light and Protector of Humanity, she has watched over the Human World for an indeterminate amount of time and is generally considered very wise and knowledgeable. She has access to all of the Powers in Pit's arsenal and can use them at will while Pit himself is limited to a handful at a time. In addition, she has held her own against the likes of Pit on one occasion and has a tendency to plan out most of his battles by directing him throughout his adventures. She is also a capable strategist, leading her military forces (albeit, which consist mostly of Pit) to victory on countless occasions and repeatedly analyzing her foes' abilities, strengths, and weaknesses to find openings. Like Pit, she also has knowledge of Nintendo's other properties and the fourth wall, mentioning them off-handedly on numerous occasions and giving Pit counsel and advice when he does battle at her temple.

Weaknesses: Palutena is sometimes too playful and teasing for her own good, Can be taken by surprise (was defeated by Medusa's surprise attack the first time around) and is prone to becoming a damsel in distress due to her own actions; for example, being captured by Medusa and then later being victim of the Chaos Kin she indirectly freed.