VS Battles Wiki
Register
Don't have an account?
Sign In
Advertisement
in: Tier 7, Tier 7-A, Pokemon,
and 19 more 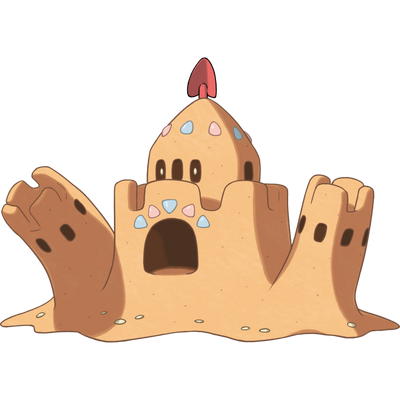 Palossand is a Ground/Ghost type Pokémon from the Alola region. Originally a mound of sand built by a child, this mound came to life by unknown means and possessed anyone who put their hand through its "mouth". After possessing enough people it was able to transform its body from a mound of sand into a sand castle. Underneath Palossand are the bones of those it has consumed the vitality of.

Speed: At least Relativistic (Pokémon of this caliber can dodge Fling, which should be faster than Seismic Toss, as it doesn't require going against gravity or throwing heavy, unwilling, beings. Should be comparable to Pokémon such as Poliwrath)

Durability: At least Mountain level+ (Can fight other Pokémon of this level)

Weaknesses: Water (even though it can help raise its defense due to Water Compaction), grass, ice, ghost, darkness attacks

Notable Attacks/Techniques: See here for a list of all moves Palossand can use.