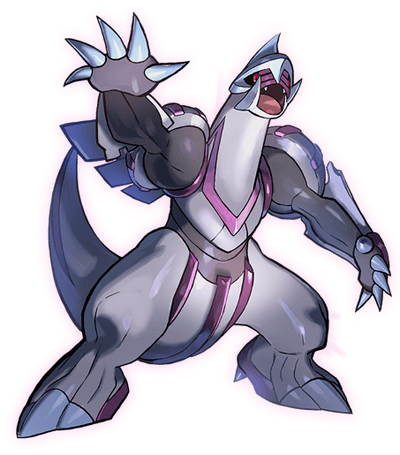 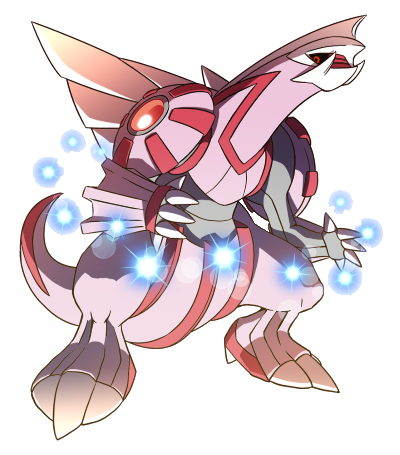 Palkia is a Water/Dragon-type Pokémon and a member of Sinnoh's Creation Trio. The Master of Space, it stabilizes the fabric of reality with its every breath, and its power has led it to be deified by Sinnoh's residents.

Age: As old as creation itself

Attack Potency: Multiverse level (Even when weakened by Dialga and having most of its power and focus on him, is still a good amount stronger than Darkrai. The latter is also scared of him. Aided in the creation of the multiverse, which contains an untold number of universes. For instance, certain universe's versions of the Kalos region contain a Reflection Cave. The mirrors in this cave each lead to other universes, each with their own versions of Reflection Cave with more mirrors leading to more universes, and so on. Also directly stated to be a creator of parallel universes in the games)

Speed: Infinite in its avatar (Can fight Dialga inside shattered space-time), Nigh-Omnipresent in its true form (Exists throughout the entirety of space)

Lifting Strength: Immeasurable (Stated to embody the entirety of their dimension, which exists on a higher plane)

Striking Strength: Multiversal (Equal to Dialga, and can harm it with physical blows)

Durability: Multiverse level (Can take and deal hits with Dialga and Giratina. Being the embodiment of space and being in a pseudo-state in between life and death, is very difficult to kill)

Stamina: Limitless (Constantly fighting with Dialga and occasionally Giratina since the literal beginning of time)

Standard Equipment: Lustrous Orb (A beautifully glowing orb to be held by Palkia. It boosts the power of Dragon- and Water-type moves when it is held)

Palkia and Dialga were creating a new universe and destroying the old one in the process.

Stabilizes reality with its breath.

Bowser (Mario Bros) Bowser's Profile (Both were 2-B, and speed was equalized)