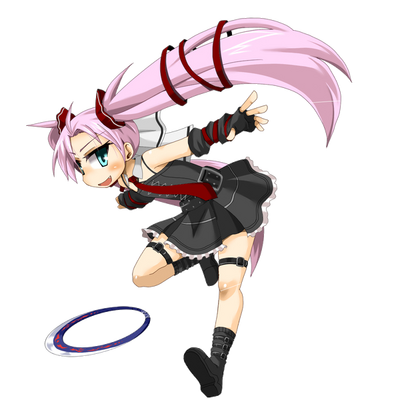 Pale is a playable character in Wonderful World. A genius child whose name is known as the youngest Bounty Hunter in history. Her parents do not love her at all and she thinks that she should have never been born. At home, she does as she said, not to lose mood, and quietly in her room when there is no use. She is named a Bounty Hunter earnestly and she wants to be recognized as an adult so that her parents will recognize it, so she work for her work every day.

Powers and Abilities: Superhuman Physical Characteristics, Magic Strings (These are used for Pale's Chakrams.), Moveset Manipulation (Her Skills can be layered one by one for each successful hit from a Skill that has yet to be used; 5 in all.), Explosion Trigger, Sheer Mentality (Pale's Finish Skill can be used with her Mental Strength, allowing for a spectacular move.), Beam Manipulation (Whenever Pale starts her Finish Skill, one or more energy beams come from the sky, and overwhelm the opponent, forcing them into her striking range.)

Range: Wherever the opponent is when they have rings from a Skill...

Standard Equipment: Donut Ring (Twin Chakrams that can be controlled via magic strings (A kind of thread that can't be cut physically.).  With retractible properties, Pale can retrieve her weapons back without getting cut herself.  She can even pull off Phantom Attacks as a result.)

Intelligence: Very High (She is a Child Genius, whereas Cielo is forgotten into myth.)

Weaknesses: Sometimes tries too hard, Is forced to watch herself more than she should (If any of these count.)

Feats: Youngest Bounty hunter (& a successful one at that.), Has literally perfected the use of Magic Strings, She also has focused on her work as a Bounty hunter, kind of like Shake in a way.

Retrieved from "https://vsbattles.fandom.com/wiki/Pale_(Wonderful_World)?oldid=4121403"
Community content is available under CC-BY-SA unless otherwise noted.