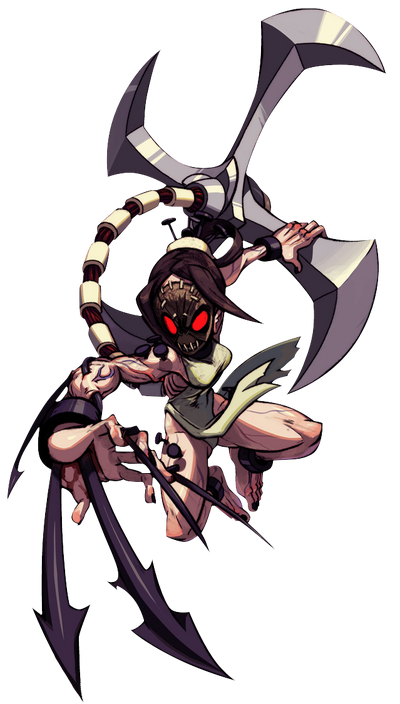 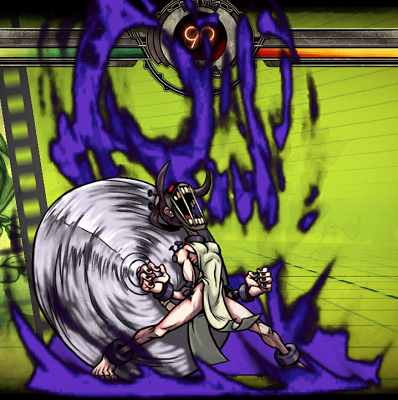 Once a normal schoolgirl named Carol, Painwheel was kidnapped by Valentine and delivered to the Anti-Skullgirls Labs’ secretive Lab Zero. There she was implanted with the synthetic Buer Drive and Gae Bolga parasites and infused with experimental Skullgirl blood, transforming her into the monster she is today. Violent and unstable as a result of these experiments, as a precaution she’s mentally controlled by Lab Zero’s powerful psychic director, Brain Drain.

Fueled by rage, she draws her power from her pain and fury. Despite that, the soul of that scared young girl still lives on inside this monstrous body, desperately fighting off the onslaught of voices that would control her.

Tier: At least 8-A, higher with Hatred Install

Powers and Abilities: Superhuman Physical Characteristics, Regeneration (Low-Mid), Flight, Gae Bolga augmented attacks, Mastery of the Buer Drive, Power increases the angrier she is, Can sense her enemy's aura, Electricity Manipulation, Resistance to Magic (Via Skullgirl Blood Infusion), Soul Manipulation (Via having 95% of her soul erased), and Mind Control (Resisted and overpowered Brain Drain's mind control and the Command Protocol he used to attempt to override her mental programming)

Attack Potency: At least Multi-City Block level (Defeated Valentine and the Skullgirl and destroyed The Skull Heart in her storyline, Described by WoG as being potentially one of the most powerful of the main cast, Due to having two Synthetic Parasites she should be comparable to Peacock, In Big Band's storyline she was stated by Brain Drain to have enough power to easily defeat Big Band if she weren't resisting Brain Drain's influence), higher with Hatred Install

Speed: Hypersonic (Kept up with Valentine), higher with Hatred Install