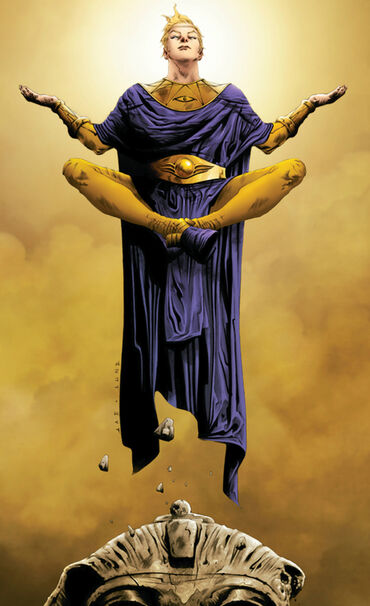 Adrian Alexander Veidt, a.k.a. Ozymandias is the main antagonist of Watchmen by Alan Moore and Dave Gibbons, published by DC Comics. Named Ozymandias in the manner of Ramesses II, his name recalls the famous poem by Percy Bysshe Shelley, which takes as its theme the fleeting nature of empire.

Adrian was born in 1939, the son of rich immigrant parents, he was found to be incredibly intelligent. After his parents and his teachers became suspicious of his grades, he successfully hid his intelligence by deliberately achieving average grades. After his parents' deaths, he inherited their substantial fortune at age 17, but chose to give it all to charity. Veidt then embarked on a vision quest, following the route of Alexander the Great - a childhood idol - throughout the Mediterranean, Asia Minor, and former ancient Persia.

It was during this journey that he consumed a ball of hashish and saw a psychedelic hallucination which inspired him to become a superhero. Returning to America, he named himself "Ozymandias" and became both a costumed vigilante, focusing particularly on organized crime, and a multi-billionaire businessman, earning a reputation as "the smartest man on the planet."

However, his own cases robbed him of the idealistic belief that battling crime would truly lessen evil and suffering in the world. This was brought to a head when an abortive attempt to organize a new superhero team was disrupted by the Comedian, who noted in his brutally apt way exactly how petty the doings of the costumed heroes were in a world where the threat of nuclear war hung overhead, and how powerless they were to stop it. This, coupled with the existence of Doctor Manhattan and the threat he posed to the entire human race, drove Ozymandias to a compulsive obsession with attaining world peace, regardless of the means necessary.

Attack Potency: Wall level (Even while early on in his training, he could already shatter stone with his fists and support his weight with one finger. Smashed through wood planks. Shattered a bully's kneecap as a pre-teen. Casually broke a thug's arm one-handed. Easily beat both Rorschach and Nite Owl in combat, while calmly delivering a speech, with Nite Owl being able to crack walls with his strength.)

Speed: Supersonic+ (Claims he can catch a bullet with ease, and proves capable of doing so. Blocked a bullet from point-blank range and dodged rounds from an M16 from behind Considers fractions of seconds to be a long time. Stated to move at speeds impossible for a human. When he fights, he is capable of quickly calculating every possible move of his opponents and every conceivable outcome of the battle in an instant, allowing him to blitz his opponents with ease)

Durability: Wall level (Completely unharmed by the attacks of Rorschach, Nite Owl, and the Comedian)

Standard Equipment: His Costume, a Headband which serves as a throwing weapon, Throwing Stilettos

Intelligence: Extraordinary Genius. (Understood letters at the age of 2, taught himself to read and then read 24 Encyclopedias at the age of 4. Got an impossibly high score in an Aptitude Test at the age of 6. Entered a dojo as a pre-teen and graduated faster than any other student. Graduated highschool at 14 and was taking post-graduate courses in Harvard at 17. Traveled the world and mastered numerous martial-arts styles, fields of studies and language. Perfectly mastered the Stock Market simply by reading the papers. Read through every Sci-Fi novel and watched every Sci-Fi movie and TV Show ever published. Created revolutionary technology by studying Doctor Manhattan, going as far as creating an "alien monster" to destroy New York City)