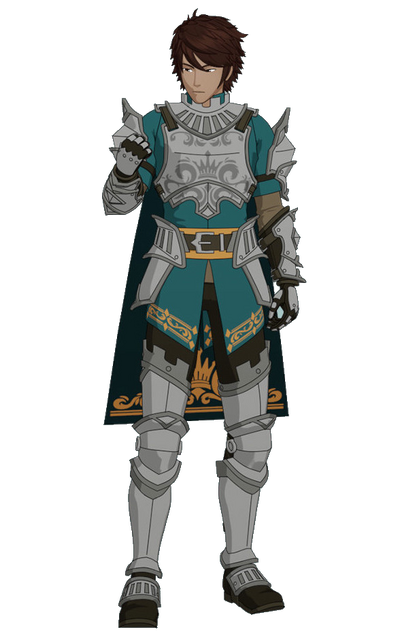 Ozpin is the Headmaster of Beacon Academy. He is introduced in the episode "Ruby Rose", inquiring Ruby Rose about where she learned how to fight, her future goals, and her desire to join his school. He is frequently seen with his cane despite having no visible motor impairment.

In secret Ozpin runs a group that consists of several individuals whose goals are keeping the people of Remnant safe from Salem and her forces. Known members include himself, Glynda Goodwitch, Qrow Branwen, General James Ironwood, Leonardo Lionheart, and the Headmaster of Shade Academy.

At the beginning of "The Next Step", it is indicated that the villains believe Ozpin to be killed by Cinder's hand, though in "Of Runaways and Stowaways", doubt is cast on this when Salem interrogates Cinder about the matter once more. In "Family", Ozpin speaks to a Mistral farmhand named Oscar Pine through a connection later revealed in "Punished" to be that their souls have combined. However, it is in Volume 6 "The Lost Fable", where his true history is revealed.

Superhuman Physical Characteristics, Immortality (Types 4 and 6), Resurrection (Soul is reborn in another body after death), Multiple Personalities (Shares a body with his host), Magic, Aura (Able to use his Aura for numerous purposes), Forcefield Creation (Aura can be used as a full-body forcefield), Statistics Amplification (Can use Aura to enhance his striking power), Enhanced Senses (Can use his Aura to sharpen his senses), Regeneration (Mid-Low), Extrasensory Perception, Power Bestowal and Forcefield Creation (Via Magic), Skilled Hand-to-Hand Combatant, Weapon Mastery, Afterimage Creation, Resistance to Extreme Heat and Cold (Aura protects the user from sub-zero temperatures, allowing them to walk through a blizzard in casual clothing or be encased in ice without being cold, as well as extreme heat up to and including the heat of flames, being blasted with steam, and being submerged in lava without being burned)

Attack Potency: Large Town level (Fought equally against Cinder Fall with the Fall Maiden's powers and visibly injured her) | Small City level (Would go on to divide his power among the four Maidens who are each capable of this)

Speed: At least Hypersonic+ (Easily blitzed Cinder with the Fall Maiden's powers before she could react, was too fast for Cinder to land a hit on him on-screen)

Lifting Strength: At least Class K | Class M (Superior to Qrow Branwen and by extension is far stronger than Ruby Rose and her physically stronger teammates)

Stamina: High, fought for an extended period of time with Salem, reducing a castle to rubble, until he was gasping for air on the floor

Intelligence: Very High (Ozpin has thousands of years of combat experience due to merging his soul with countless others in order to protect Remnant. He is highly analytical, able to study his opponent in the middle of combat thoroughly enough to be able to clearly how he beat them and what they could have done to stand a better chance. He secretly runs a group whose goals are keeping the people of Remnant safe while managing a top-tier high school, is a capable strategist and leader, has the ability to persuade even volatile personalities to co-operate with his plans, and knows the right balance of firmness and kindness to get the desired results from his subordinates)

Weaknesses: Continual use of his Aura will cause it to decay to the point where he can be left open to more significant damage. Aura's durability is cumulative; it will deplete with each attack she takes and can be brought down by characters of similar strength. The time it takes for him to reincarnate in another body can vary greatly

Note: The body Ozpin takes during Volume 4 and onward is that of Oscar Pine.

Retrieved from "https://vsbattles.fandom.com/wiki/Ozpin?oldid=7049819"
Community content is available under CC-BY-SA unless otherwise noted.