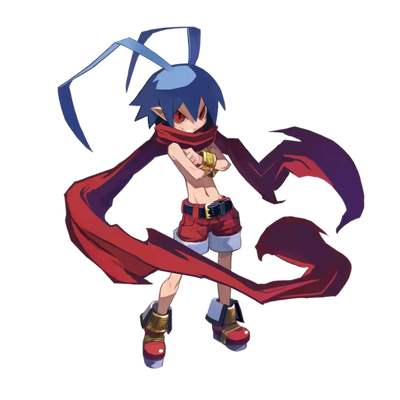 The snarky and self-centered heir to the Netherworld, Laharl woke up after a two-year sleep following the death of his father, King Krichevskoy. Unbeknownst to him, all of his vassals except for Etna had left his service and were now trying to take his rightful place as Overlord. Outraged, Laharl set forth to win back the contested position, not realizing that his misadventures would take him far beyond this singular goal.

Though in time he grew up and developed greatly as a person, Laharl usually prefers to act conceited and demanding to his underlings and to continue to take his duties as an Overlord very seriously even if they no longer include being evil by principle. He continued to make appearances in various other games within the Nipponverse; however, much to his bemusement, he has been reduced from the main protagonist to the role of a secondary, secret antagonist in the post-game of future Disgaea installments.

Attack Potency: Solar System level, possibly higher (Was able to destroyer every star that could be seen in the sky of his netherworld) | Galaxy level (Should be stronger then the Flora Beast who can do this, and those that can use Galaxy Comet) | Multiverse level+ (Defeated Alexander who is comparable to full power Pram, though tends to need help when fighting her, Capable of matching any of the other main Overlords, including Overlord Mao, Defeated Seraph Lamington who is comparable to Killia, But can't beat Killia even with help, Defeated Baal, whose power is said to be of the 4th dimension)

Intelligence: As an Overlord, Laharl is an extremely powerful Demon and is an expert in hand-to-hand and weapon-based combat, wielding nearly any weapon with ease and triumphing over foes with hundreds if not thousands of years of experience over him. He has also shown magical talent befitting of a demon, trapping his opponent in powerful runes to restrain them before destroying them with his Overlord Dimension attack. However, he is selfish, rude, overconfident, and self-centered due to his young (for a demon) age and is quite impulsive and hot-headed. Although he matures and becomes more level-headed throughout the events of the game, his arrogant streak never fades completely.

Weaknesses: Laharl is overconfident, can be manipulated with relative ease, and can be physically weakened by both nearby sexy females and nice words/phrases like "love", "hope", "world peace", etc. | Same personality flaws as before, but the latter two do not seem to be nearly as prevalent as they were in the past; Laharl is significantly more mature than he was at the beginning of the story, and the weaknesses are now minor.

Laharl-Chan. Yes, this exists and it is canon.

Laharl being amusingly dismissive of the first potential rival to his throne during his early adventures, breaking the fourth wall in the process.
Add a photo to this gallery