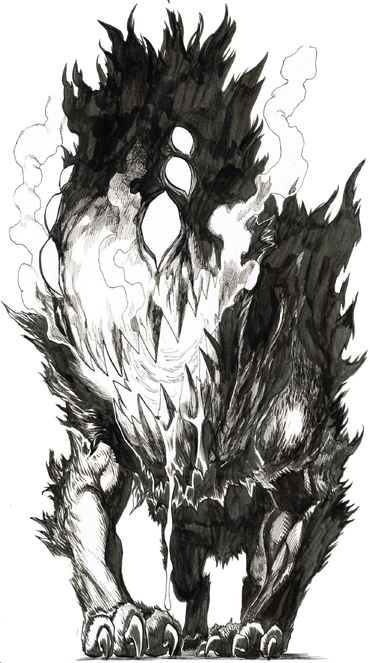 Overgrown Rover is an enormous, doglike monster who appeared during the S-Class Heroes' attack on the Monster Association. Rover is a Dragon level threat and is by far one of the Association's most powerful monsters, albeit one of the least intelligent. It makes its first appearance when Garou attempts to rescue Tareo, blocking their escape. The beast proves incredibly dangerous, blasting Garou through the floor with its energy projectiles. When Saitama shows up, the creature attempts to stop him, but Saitama, seeing him as a dog, punches Rover down. Amazingly, this merely knocks the monster unconscious instead of killing it. However, Saitama was only holding back. Rover regains consciousness after a bit, only seeing Saitama again when he awakens. Orochi orders Rover to help him, but wisely, Rover ran away.

Rover later battles Bang, Bomb, and Fubuki when they attempt to enter the base. Even with their combined might, the three of them prove entirely unable to harm the monster. However, when Bang mentions the word "sit," Rover's doglike nature takes over, and it calmly sits down, allowing the heroes to pass. After the Monster Association's base was destroyed, Rover survived but was shrunk down to the size of a relatively small dog. When Saitama returns to salvage what he can from the wreckage of his old house, Rover, and a significantly weakened Black Sperm decide to follow him back to the Hero Association HQ as pets. The two formerly dangerous monsters are currently entrusted to Butterfly DX and Chain'n'Frog due to Forte losing a bet with Saitama.

Powers and Abilities: Superhuman Physical Characteristics, Large Size (Type 1), Enhanced Senses (Rover was able to detect the location of Bang, Bomb, and Fubuki through the noise and smell of his own rapid-fire blasts), Stealth Mastery (His first appearance in the series was sneaking up behind Garou and Tareo. Able to sneak up on two masters of martial arts in Bang and Bomb and also a psychic in Fubuki without being detected mid-fight till he smashed through the wall, despite being a Large Size Type 1 during his rampage with loud energy projectiles), Size Reduction via Damage Negation (Appears to be able to reduce its size when significantly harmed as opposed to taking lethal damage), Energy Projection (Can rapidly fire in median blasts, charge up to create a bigger blast, and change direction in mid-flight)

Attack Potency: City level (One of the strongest monsters in the whole Monster Association. It is noticeably more powerful than most other Dragon level monsters. Toyed with Garou. Effortlessly fended off the combined might of Bang, Bomb, and Fubuki while weakened. Would have damaged both Bang and Bomb had his charged energy attack connected)

Speed: At least Massively Hypersonic (Fought against Half-Monster Garou. Appeared behind Bang, Bomb, and Fubuki before they even realized he had moved)

Durability: City level, likely higher (Took no damage from Half Monster Garou's strongest attack. Survived a casual punch from Saitama when Gouketsu could not, although Saitama admitted he was going easy on Overgrown Rover. Said punch shook the entire Monster Association. Completely unaffected by the Cross Fang Dragon Slayer Fist performed by an amplified Bang and Bomb while wounded. This attack was stated by Murata to be more powerful than the Whirlwind Water Stream Roaring Aura Sky Ripping Fist, which was powerful enough to completely shatter Elder Centipede's carapace)

Range: At the very least multiple kilometers with energy blasts

Intelligence: Animalistic (Presumably higher than that of an average dog. Choose to use stealth on Bang, Bomb, and Fubuki for an ambush strategically in combat than charging at them)

Weaknesses: Can be commanded with the right commands like an average dog.