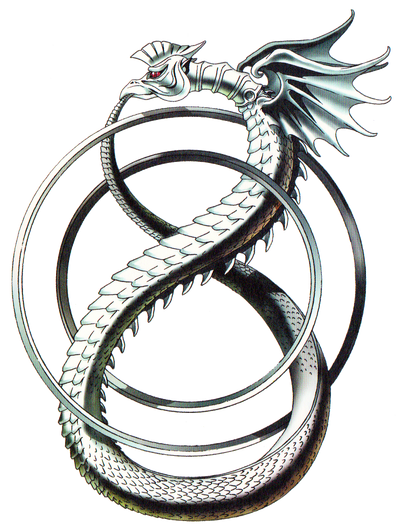 Ouroboros Maia is a dragon that signifies eternity by biting its own tail to form a neverending circle. It is considered an important material to create the Philosopher's Stone through the use of alchemy and bears similarities to Oceanus of Greek myth and the biblical Leviathan.

Powers and Abilities: Superhuman Physical Characteristics, Abstract Existence (Type 2), Immortality (Types 1, 3, and 8. Can return to The Axiom to reform indefinitely), Conceptual Manipulation (Type 2), Regeneration (High-Godly. Capable of regenerating after being erased from nonexistence alongside the entire multiverse across past, present and future), Nonexistence Erasure, Acausality (Type 4; Demons are naturally born in a world beyond time and do not perceive it linearly, being completely unnafected by the collapse of the multiverse across past, present and future), Non-Corporeal (As a Demon, Ouroboros is not a physical being, and is a thought-form made of pure information and data), Reality Warping, Space-Time Manipulation (Ouroboros is the embodiment of both Infinity and Eternity, and Demon Gods far weaker than her generate entire universes as extensions of their selves in the Expanse, and are capable of holding the embodiment of all Time as mere aspects of themselves), Soul Manipulation (Demons are capable of destroying souls with normal attacks, as well as absorbing them and collecting the populations of entire cities to turn them into energy), Energy Manipulation, Matter Manipulation, Flight, Telekinesis, Telepathy, Teleportation, Lightning Manipulation (With the spells Mazionga, Thunder Break, and Maziodyne), Fate Manipulation (Far superior to beings such as the Norns, whose influence over Time and Fate bounds even Demon Gods who exist beyond all of space and time), Healing and Resurrection (Recovers life while moving with Spring of Life, recovers all life with Recarmdra, revives a dead ally with Recarm), Life and Death Manipulation, Status Effect Inducement, Statistics Amplification and Reduction (Becomes immune to sleep / panic with Null Mind, becomes immune to Poison / bind / sick / brand with Null Nerve, increases magic power by 100% with Makakaja, lowers all enemies defenses by 2 with Acid Breath, inflicts Paralysis with Paral Eyes, poisons enemy while inflicting Almighty damage with Venom Flash), Resistance Negation (Can cast Almighty Attacks which bypass all magical defenses and innate resistances), Resistance to Conceptual Manipulation

Attack Potency: Multiverse level+ (Is the embodiment of both infinity and eternity, on a 4th Dimensional-scale as even the weakest boss of Strange Journey is a Universal+ entity)