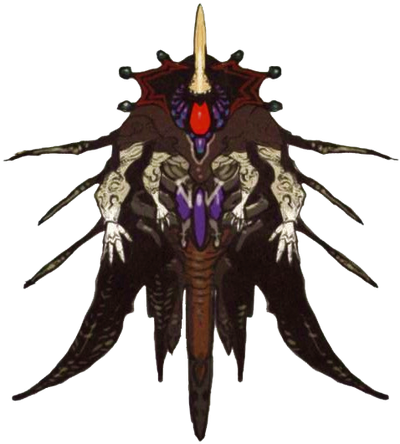 Ouroboros is the eldritch monstrosity that only appears in the True Ending of Bravely Default. He is the true mastermind behind the events of the game, and thus the master of Airy, who misleads and lies the heroes throughout the story. Intrigued by the fact that the party was able to defeat her, he devours her entirely and confronts them himself, intending to devour all possible realms and introduce pain and strife into the Celestial Realm (the Real World) for his own amusement, only to be defeated when the combined efforts of every alternate version of the party stops each of Ouroboros's attempts to devour their worlds, halting his ability to heal, and thus allowing the party to defeat him once and for all.

Name: Ouroboros, The World Devouring Serpent, the Serpent that Devours the Horizon, God of Destruction

Attack Potency: At least Multiverse level, possibly Multiverse level+ (Superior to Airy who linked a myriad of different worlds. Can casually devour an entire reality in seconds, and has been doing so repeatedly for over 110 million years. He is stated to be able to devour a realm for each of his six tentacles. Zero Dimension ignores conventional durability.)

Speed: Massively FTL+ (Devoured an entire realm and absorbed its energy in seconds)

Striking Strength: At least Multiversal, possibly Multiversal+ (It was stated that he could devour entire realms with a single tentacle.)

Durability: At least Multiverse level, possibly Multiverse level+ (Can channel the energy of multiple realities and required the efforts of all of the party's alternate selves to defeat.)

Stamina: Limitless, so long as he has worlds to devour.

Intelligence: Supergenius. Has great knowledge of the workings of realities, and is incredibly ancient. However, he is also incredibly self-centered and calloused, and cannot conceive of the possibility of defeat.

Weaknesses: Incredibly arrogant. Regeneration can be halted with DeRosso's sacrifice, as well as if his opponents' alternate selves are warned and thus negating his attempts to devour worlds. Regeneration is voluntary, and must be activated to use and can be sealed with the power of eternity. More vulnerable to water and Anti-Dragon related attacks. Can't show his true form or unleash his full power outside of dimensional rifts such as the Infernal Realm.