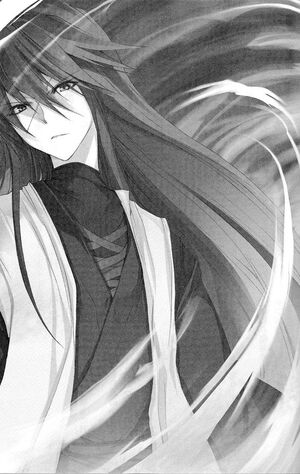 Ouma Kurogane is the older brother of Ikki and Shizuku Kurogane and one of Japan's two A-Rank student knights. He is also a guest member of Akatsuki, a team of mercenaries hired by the terrorist group Rebellion to infiltrate and win the Seven Stars Sword Art Tournament.

Powers and Abilities: Superhuman Physical Characteristics, Wind Manipulation, Magic, Master Swordsmanship, can use wind to bend the light in his surroundings to turn himself invisible, can manipulate air resistance to make his strikes faster and sharper, can use magic to boost his physical stats and create a barrier around himself

Lifting Strength: At least Class M (Much stronger than Ikki)

Durability: Large Mountain level+ (Got up after a punch from Dragon Spirit Stella Vermillion.)

Stamina: High, can fight for extended periods of time

Range: Over one meter with Ryuuzume, over fifty meters with magic

Intelligence: Has years of combat experience, but is arrogant and doesn't know when to fall back

Weaknesses: Very arrogant, doesn't know when to retreat, usually refuses to fight against weaker opponents, Kusanagi gets weaker with each use after the third, destroying Ryuuzume should deal enough mental damage to knock him out