VS Battles Wiki
Register
Don't have an account?
Sign In
Advertisement
in: Tier 9, Tier 9-A, Characters,
and 20 more 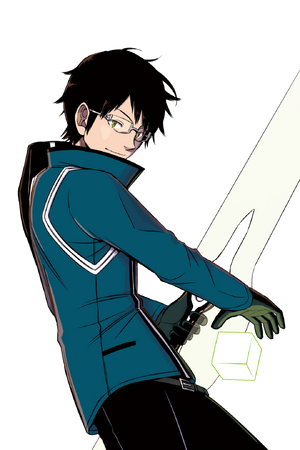 Osamu Mikumo (三雲みくも 修おさむ, Mikumo Osamu) is one of the five main characters in the manga and anime series World Trigger. He is a B-Rank Shooter and captain of Tamakoma Second.

Powers and Abilities: Superhuman Physical Characteristics, Inorganic Physiology and Resistance to Pain Manipulation(As a Trigger user his body is composed of entirely of Trion Energy and thus cannot feel pain), Energy Manipulation and Energy Projection (Is able to shoot blast of Trion with Hound and Asteroid), Danmaku via Asteroid (is able to create 27 projectiles at once and fire them at rapid fire), Homing Attack via Hound, Forcefield Creation (Can generate shields), Weapon Mastery(Blade and Shield User),Preparation along with Wire Manpulation via Spider (able to analyze his opponents and formulate plans to defeat stronger opponents using various traps like his wires), Resistance to Extrasensory perception via Bagworm

Speed: Subsonic (Can keep up with Mold Mod's speed), Supersonic with Thruster

Lifting Strength: Class 10 (Had half of the strength required to lift a huge pillar yielding this result)

Stamina: High (While Osamu has low trion levels in comparison to most agents like all others his Trion body is extremely efficient and doesn't feel pain which allows him to continue fighting after loosing limbs or receiving fatal injuries)

Intelligence: Gifted (Osamu's defining trait is his high strategic and tactical intelligence, being praised by top-tier personnel and Border administration.)

Weaknesses: Low trion Level, while Osamu has average Trion levels it was stated by Replica and Kyosuke Karasuma that his trion was weak when compared to that of other border agents, with Kyosuke showing disbelief that he was a B-rank Agent.