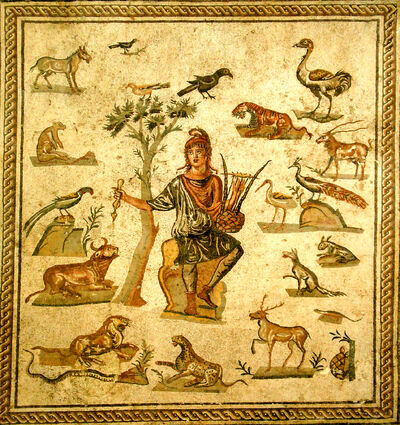 In Greek mythology and Orphism, Orpheus is the worlds greatest musician with songs that bring even the gods to tears. He was taught to play the lyre by the god Apollo and used his skills to help the Argonauts and to attempt to revive his dead wife, Eurydice. His father is Oeagrus, the Thracian king, and the Muse Calliope.

Attack Potency: At least Small Building level (Pulled apart two cliffs with his music to allow the ship Argo to pass through.)

Speed: At most Transonic with his music

Lifting Strength: Superhuman (Sung the ship Argo into the sea with the help of the Argonauts.)

Stamina: High (Goes 7 days without eating when waiting on the river Styx. Still able to scream his wife's name even with his head chopped off)

Range: Hundreds of meters with voice (The farthest a human voice can travel is 180 m)

Intelligence: Orpheus is divine-like in his ability to create music and song and had years of experience with it.

Weaknesses: Music can't directly affect anything that is deaf, insane, or drunk.

Retrieved from "https://vsbattles.fandom.com/wiki/Orpheus_(Myth)?oldid=5387779"
Community content is available under CC-BY-SA unless otherwise noted.