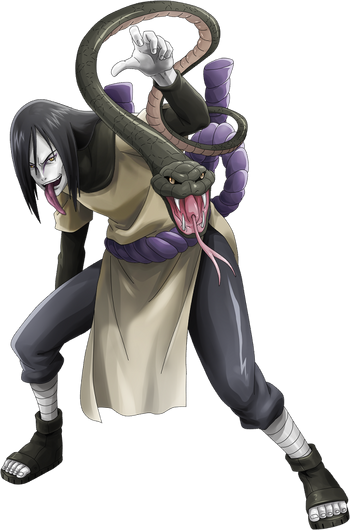 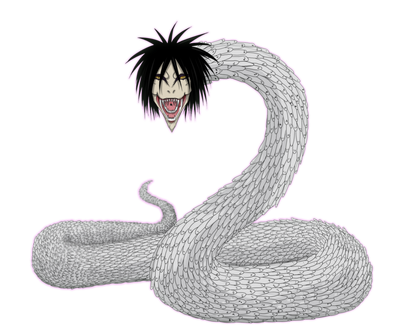 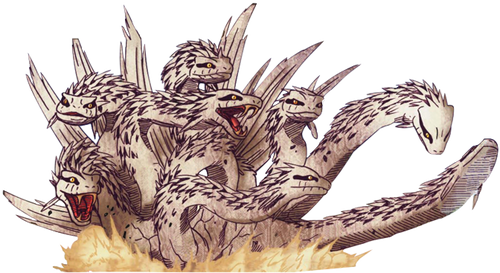 Orochimaru (大蛇丸, Orochimaru) is one of Konohagakure's legendary Sannin. With a life-ambition to learn all of the world's secrets, Orochimaru seeks immortality so that he might live all of the lives necessary to accomplish his task. After being caught red-handed performing unethical experiments on his fellow citizens for the sake of this immortality, Orochimaru defected from Konoha rather than be persecuted for his ambitions, and for many years sought the village's destruction to take revenge and demonstrate what he had learned. After several apparent deaths in the pursuit of his goals, Orochimaru realizes his approach is flawed through Kabuto Yakushi, his former associate, and begins monitoring the choices and actions of his former apprentice, Sasuke Uchiha.

Powers and Abilities: Superhuman Physical Characteristics, Acrobatics, Chakra Manipulation and Absorption via touch, Master Hand-to-Hand Combatant, Shapeshifting (Can transform into animate and inanimate objects), Weapon Mastery (Can also extend and remotely control Kusanagi), Genius Intelligence, Stealth Mastery, Curse Manipulation (Via the Curse Mark), Sealing, Paralysis, Illusion Creation, Explosion Manipulation with explosive tags, Fire Manipulation, Air Manipulation, Electricity Manipulation, Water Manipulation, Wood Manipulation, Earth Manipulation (Can travel underground and phase through his surroundings to avoid damage and launch surprise attacks, while remaining undetected), Statistics Amplification (Can augment his physical capabilities with chakra and enhances his speed with Shunshin), Limited Telekinesis (Can move his sword without the need for physical contact), Fear Manipulation (Made Sasuke contemplate suicide due to his killing intend and paralyzed Sakura from moving), Transformation (Can transform into a giant eight-headed snake), Immortality (Types 3 and 6), Regeneration (At least Low-Mid, able to heal from being bisected, up to High-Mid with body replacement technique), Summoning (Can summon snakes to wrap around targets, bind and constrict them, inflict damage on them with their poisonous fangs (and blood of his true form is toxic), track targets by their heat and smell, use as shields to defend himself from harm, among other things), Duplication (Can create shadow clones who can utilize his techniques, relay their knowledge and experiences to him, act as distractions, among other things), Body Control (Can stretch and lengthen parts of his body. Able to create snakes from inside of his body and use them to attack. Can "shed his skin" and create a new body for himself, allowing him to get rid of all previous damage inflicted on him), Necromancy (Capable of resurrecting the dead as near-immortal zombies under his control, however he needs preparation for this, and it is not useful in general combat), Resurrection (He can be revived any number of times through the Evil Releasing Method, provided there are enough cursed seals and DNA. However this requires outside help and is not useful in general combat), Possession (Able to transfer his soul to someone else's body, gaining all their abilities and powers), can replace himself with inanimate objects to avoid damage, Soul Manipulation (He can use the Dead Demon Consuming Seal), Surface Scaling, Dimension Creation (Created a separate dimension he uses to possess others), Death Manipulation (by linking up hands with another he can cause mutual death of him and his target), Water Walking, Resistance to Soul Manipulation (Held off Hiruzen Sarutobi's attempt to extract his soul) and Paralysis Inducement (Unaffected by Log's temporary paralysis technique)

Intelligence: Extraordinary Genius (Possesses vast knowledge about the shinobi world and is an expert in genetics and cloning, capable of recreating Hashirama's Wood Release and Jugoo's sage powers). Experienced shinobi with over 50 years of experience in battle. A tactical genius, as he successfully managed to weaken Konoha during the Chunin exams, coerce Sasuke to his side, and keep Kabuto as a loyal servant through manipulations

Weaknesses: He can only perform his body-switching technique once every three years, and needs a new host after this period. Extreme arrogance and pride, which prevents him from fighting at his best as he overextends himself

As one of the Sannin and a former member of Akatsuki, Orochimaru is one of the most powerful shinobi in history, showing a genius that few could match since childhood. Even Tsunade regretted that they were on opposite sides and that he was "dead" during the Fourth Shinobi World War. At his full power, Orochimaru could toy with the likes of Sasori, an influential member of Akatsuki, as well as defeat the Fourth Kazekage and later his own teacher, the Third Hokage, albeit he lost the use of his arms to the latter. Despite this, he was still strong enough to fight Naruto's four-tailed form evenly to a stalemate, and Sasuke openly admitted that his defeat of Orochimaru was only because of the Sannin's body rejecting him.

Wishing to obtain all of the techniques in the world, Orochimaru has a vast arsenal of techniques at his disposal, ranging from simple offensive ones, which nonetheless become deadly when performed by him, to higher ranking, more complicated ones. Even at a young age, he was able to utilise his former master's signature Shuriken Shadow Clone Technique. Orochimaru also exhibited mastery with the Transformation Technique, as he was able to view Sasuke's battle with Yoroi Akadō during the Chūnin Exams, undetected. He was also able to pose as the Fourth Kazekage for weeks, fooling the entire village of Sunagakure, including its elite shinobi and the ones closest to the dead Kazekage. When conducting experiments, he is also capable of utilising medical ninjutsu and would make use of the chakra scalpel.

In terms of defensive techniques, Orochimaru uses both Summoning: Rashōmon and Summoning: Triple Rashōmon, in which he summons a varying number of large demonic gates that are capable of enduring even the most intense forms of damage. Orochimaru can also use a technique to avoid injury, and another to temporarily paralyse an opponent.

Orochimaru's trademark trait is his affinity with snakes, in addition to impacting the appearance and composition of his pure form, and granting him the ability to extend his limbs to abnormal lengths and to take on snake-like traits in battle, caused him to learn several snake-related skills, including learning Sage Mode. His snake-related techniques have been referred to as Power of the White Snake. One such ability is being able to summon giant snakes to fight alongside him in battle, made possible by the summoning contract tattooed on his arm. This allows him to summon snakes within his vicinity, as opposed to having to place his hand on a surface. If need be, Orochimaru can morph into a giant snake, despite being slightly smaller in size to his larger ones. His signature summon was Manda, a colossal snake which was described as the largest in the world, with immense fighting capabilities. With Hidden Shadow Snake Hands, Orochimaru can instantly call forth snakes from his sleeves and mouth to attack his opponents in large numbers with venomous bites. A stronger variation of this technique was the Many Hidden Shadow Snake Hands, in which the summoned snakes grow noticeably in both numbers and size, as well as a variety wherein the snakes had sword blades sticking out from their mouths.