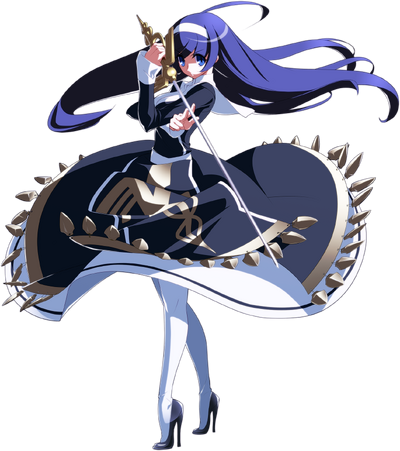 Orie (full name: Orie Ballardiae) is a playable character in Under Night In-Birth. While she lost her parents at a young age, she was rescued and taken in by the Licht Kreis, a western organization dedicated to annihilating the Voids. Being raised and trained under the Licht Kreis, Orie becomes an Executor (the organization's term for a Void hunter) so that no one else has to suffer like she did. She's currently on a mission in Japan to gather information about the new, rising organization called Amnesia.

She's a kindhearted woman with a strong sense of justice. While Orie is extremely loyal to Licht Kreis and fights to uphold its ideals of peace and order. she does have doubts that her saviors aren't as noble as she previously believed (thanks to the action of one Erika Wagner).

Standard Equipment: A rapier named Guardian of Law and Order, The Ruler

Intelligence: In high school, trained by the Licht Kreis in combat