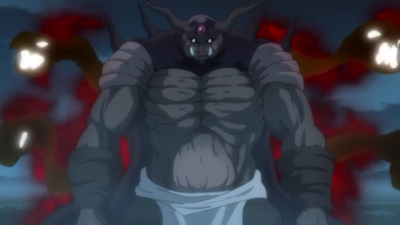 Geld was feared as the Orc Disaster due to his ability to lead an army of orcs. After devouring Gelmudo, Geld became a Demon Lord Seed.

Superhuman Physical Characteristics, Automatic Translation (Magic Sense can translate languages automatically), Enhanced Senses and Extrasensory Perception (via Magic Sense), Magic, Immortality (Types 2 and 3), Healing, Regeneration (High, molecular, works on Magic Power reserves, slower than Rimuru, but comparable to Rimuru when supplemented with Healing Magic, powered by Magic Power reserves or absorbed organic tissue), Adaptation, Telepathy, Power Absorption, Power Mimicry, Corrosion Inducement, Aura, Durability Negation and Death Manipulation (Orc Disaster Geld has Ravenous which has Chaos Eater that can harm the spiritual body. The spiritual body is one of the layer covering the soul and Orc Disaster Geld is able to kill people by attacking their spiritual bodies which forms their internal force), Unholy Manipulation (Monsters are made of magicules, which can be purified or warded off by holy energy), Radiation Manipulation and Creation (Monsters of significant aura can create an aura akin to radiation, that is extremely toxic to organic life and can induce death in high concentration. It will cause monsters to be born due to the high concentration of magicules)

Unconventional Resistance to Power Nullification, Power Modification, Power Absorption and Power Mimicry (Skills are inscribed into the soul which resists any outside interference unless the interference is stronger than the soul's defenses), Resistance to Physical Damage (Orc Disaster Geld has Resist Melee which grants resistance to physical damage), Magic (Higher-level Magic-born have intrinsic magic resistance) Fire Manipulation (Has the tolerance skill Resist Fire Attack which grants him high resistance to fire-type attacks after being hit by and enduring a Hell Flare attack and multiple Black-Flame imbued sword attacks), Electricity Manipulation (Has the tolerance skill Resist Electricity which grants him high resistance to electricity-type attacks after being hit by and enduring a pin-point Death Storm), Soul Manipulation (Unique skills are the shape of the mind itself and require strong souls to possess them), Information Manipulation (Magic Senses overloads the brain with so much information it would have killed a normal human, but can be used casually) Data Manipulation (The information from Magic Sense is turned into data, which overloads the human brain, but can be used casually), Sense Manipulation (Stronger than Ranga, who can resist Confusion, a spell which distorts senses of smell), Fear Manipulation, Confusion Inducement, and Sleep Manipulation (Can resist Coercion, which causes targets to run away, induce confusion, faint and soil themselves. Even basic users can use this on a scale of 210 people), Paralysis Inducement (Comparable to Rimuru who resisted Gazel's Heroic Aura, which is a higher-level version of Coercion that ignores resistance to paralysis because it's actively maintained and if the Aura Restraint is gone, the restraint effect will be gone too), Empathic Manipulation (Comparable to Rimuru who resisted Gazel's Heroic Aura, making those with weak resistance submit to him or view him in a positive light), Radiation Manipulation and Death Manipulation (Can resist Veldora's aura which causes the death of humans)

Attack Potency: Large Mountain level (Comparable to Rimuru who can harm him)

Speed: Relativistic (Comparable to Shizue, and is superior to Kijin group) 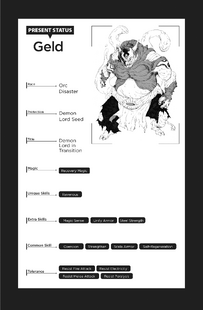 Stats
Add a photo to this gallery