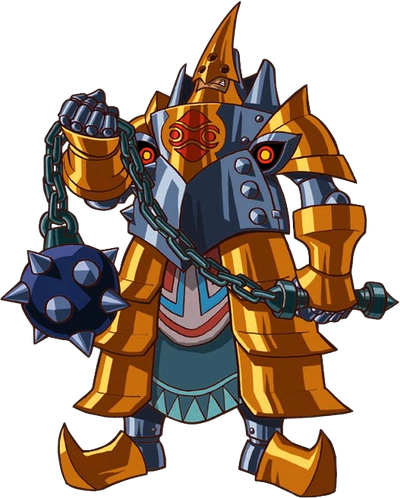 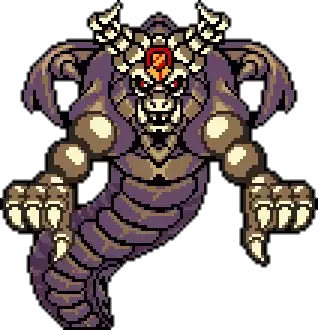 General Onox, the General of Darkness (闇の将軍, Yami no Shōgun), is the primary antagonist of The Legend of Zelda: Oracle of Seasons. Doing the bidding of Koume and Kotake, Onox throws the seasons of Holodrum into chaos, in order to cause enough damage to the peaceful land to light the Flame of Destruction, a necessary step in resurrecting Koume and Kotake's master, Ganon. Interestingly, artwork depicts the Gerudo symbol on Onox's armor, a symbol also found on the clothing of Veran, his villainous counterpart from The Legend of Zelda: Oracle of Ages.

General Onox is a ruthless, apathetic tyrant who originated within the very depths of the dark realm. He exhibits a superiority complex, often taunting and prodding Link throughout his adventure. Well aware of his purpose, Onox longs for the corrupted world that he is being made to create and shows no signs of fear towards Link, Din, the Maku Tree, or anyone else. It is unknown whether his strength and power was his own to begin with, or if he was granted them by Koume and Kotake when he decided to join up with them. Interestingly, if Link manages to defeat Veran before going to Holodrum, General Onox will recognize Link as the person who defeated Veran while Link is defending Din, and claim that he is stronger than she was.

The humanoid form of Onox, who is encased in nigh-impenetrable golden armor, is that of a man of huge stature, more than four times Link's size; furthermore, he possesses immense physical strength. He uses his strength, attributes to his advantage in battle, his weight alone having the power to make a roof collapse and damage his opponent. In battle, Onox uses a ball and chain, which he wields with considerable ease. He also possesses the ability to summon whirlwinds and tornadoes in battle, and even manages to somehow use one to "conceal" himself when he kidnaps Din. In his true form, that of a Dark Dragon, Onox attacks with his claws and breathes different types of fireballs at Link; in this form, he is impervious to damage, except attacks directed exactly at his weak spot, namely, the jewel embedded in his forehead. Notably, the humanoid form of Onox closely resembles the typical design of an Iron Knuckle, and it is possible he may be somehow related to these enemies. Zant from The Legend of Zelda: Twilight Princess also resembles Onox somewhat due to the shape of his helmet and the Gerudo Symbol on his clothing.

Origin: The Legend of Zelda: Oracle of Seasons

Classification: Dragon of The Dark Realm

Powers and Abilities: Superhuman Physical Characteristics, Magic, Telekinesis, Elemental Manipulation, Flight and Levitation, Transformation (His true form is that of a Dark Dragon, he can transform himself into a giant humanoid knight), Able to encase others inside magical crystal prisons, Weather Manipulation (Capable of conjuring large thunder storms) | All the powers of his previous form, Breath Attack, Fire Manipulation, Able to extend the reach of his arms

Attack Potency: Multi-Continent level (Able to easily conjure large thunderstorms and sank the Temple of Seasons into Subrosia. Far stronger than beginner bosses like King Dodongo that can take Link's bombs and hookshot, and should be comparable if not superior to bosses like Trinexx, who fought ALTTP Link with the Ether Medallion and Master Sword) | Multi-Continent level (Stronger than his previous form)

Lifting Strength: At least Class G (Should be far superior to the likes of Gohma physically) | Class T

Standard Equipment: A flail, his armor | Nothing notable

Intelligence: A skilled and competent warrior | The same

Weaknesses: Nothing notable | The gem on his forehead is less durable than the rest of his body.