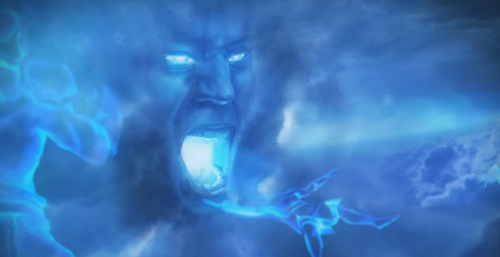 Powers and Abilities: Superhuman Physical Characteristics, Immortality (Type 1), Reality Warping, Possession, Creation, Empathic Manipulation (Controlled Onaga's and Shao Kahn's emotions throughout the series to merge itself back together), Absorption (Can absorb other beings into himself), Soul Manipulation (Can consume the souls of its enemies), Dimensional Manipulation (Scaling from other Reality Warpers, One Being should be no weaker than them in this aspect, if not superior), Non-Corporeal (Completely lacks a physical form) and Abstract Existence (Exists as the Non-Corporeal, Omnipresent Embodiment of Magic), Omnipresence (It's suggested that there is a little bit of it on everyone. The denizens of the realms are merely parts of a greater collective that is the One Being)

Attack Potency: Universe level+ (It is a sentient Universe, and all of existence is its dreams. Brought reality to an end upon being awaken by having the realms merged during Shinnok's ending in MKX)