The Onager-class star destroyer was a specialised capital ship developed by the Galactic Empire some time between 5 and 0 BBY. It was meant to act as a long range bombardment platform that could take out enemy capital ships or planetary targets from “beyond long range” with the use of “massive” particle cannons and a new kind of powerful “superheavy” turbolaser. Rebel Alliance Intelligence Service nicknamed this class as Siege Breaker.

Onager-class warships appear to have been deployed only in limited numbers in only certain sensitive imperial operations in the years leading up to and throughout the Galactic Civil War. It is likely that the Galactic Empire chose not to mass manufacture these ships in larger numbers due to dedicating more funding, resources, and manpower to Project Stardust.

Speed: Unknown atmospheric speeds. Can accelerate continuously to Sub-Relativistic speeds in space. Massively FTL+ travel via hyperspace (This line is likely equipped with a Class 2 hyperdrive, which is the most common hyperdrive class on Imperial Navy warships. Should thus be this fast)

Range: Unknown with particle cannons, possibly tens of thousands of kilometres with its main superheavy turbolaser cannons [Designed for taking out capital ships and planetary targets from "beyond long range". Capital ships in this verse are capable of anti-ship and orbital strikes from thousands of kilometres. Heavy planetary ion cannons are known to have effective ranges of up to 4,000 kilometres and maximum bolt ranges tens of times that. The Onager's range is implied to be even greater]. 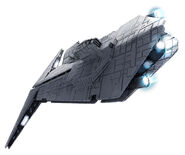 An Onager bombarding a planet with her main superheavy composite beam turbolasers.
Add a photo to this gallery

Retrieved from "https://vsbattles.fandom.com/wiki/Onager-class_Star_Destroyer?oldid=6371936"
Community content is available under CC-BY-SA unless otherwise noted.