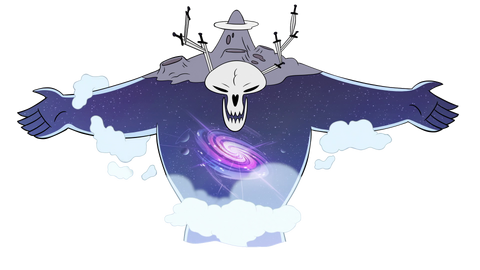 Omnitraxus Prime is a minor character in Star vs. the Forces of Evil. In spite of his position in the Magic High Commission and his imposing appearance, Omnitraxus is fairly goofy and willing to help those in need. Calling himself the "space-time guy", he is willing to assist people with space-time-related problems, such as helping Star when she was caught in a time loop.

Age: Unknown, but likely transcends the concept of time

Classification: Master of Space-Time, Member of the Magic High Commission

Speed: Omnipresent within his universe. Otherwise Sub-Relativistic via power-scaling off of Hekapoo

Lifting Strength: At least Galactic (His body is large enough to contain an entire galaxy within it), likely Immeasurable

Intelligence: Unknown, but as the embodiment of the universal-space time, it can be assumed that Omnitraxus is very knowledgeable about it as a whole.

Retrieved from "https://vsbattles.fandom.com/wiki/Omnitraxus_Prime?oldid=6984863"
Community content is available under CC-BY-SA unless otherwise noted.