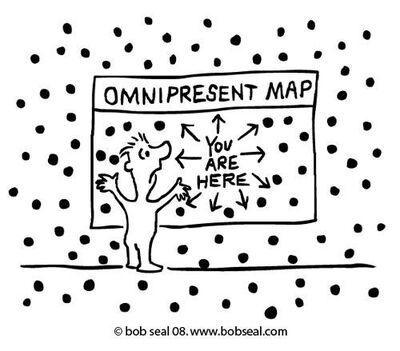 Omnipresence is the property of being present everywhere, whenever and nowhere at the same time, referring to an unbounded presence. The ability lets you to be everywhere at once that is, at every point in space during a given instant. Some characters are Omnipresent within a single universe, while others are Omnipresent on a Multiversal or even higher scale.

Nigh-Omnipresence is when somebody is almost everywhere at once. An example of this includes being Omnipresent within a city or a planet.

Occasionally, the term is used in a limited way, such as "omnipresent in a city" or "omnipresent across the earth". While this is technically incorrect, the meaning is obvious.

Because it has consequences for combat similar to those of a speed statistic, omnipresence is affected by speed equalization in versus matchups.

Retrieved from "https://vsbattles.fandom.com/wiki/Omnipresence?oldid=6476394"
Community content is available under CC-BY-SA unless otherwise noted.