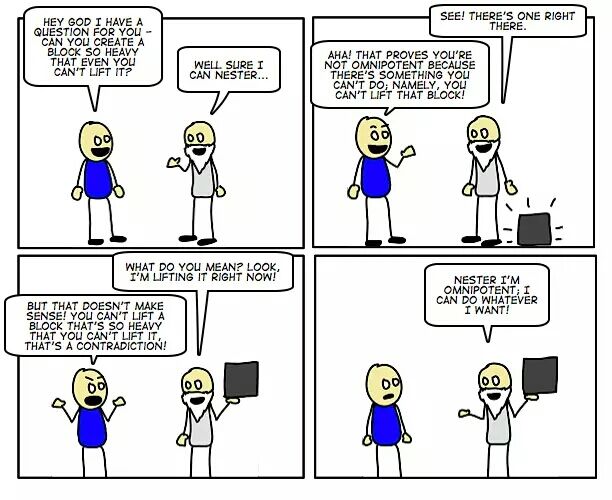 Sometimes called "Unlimited Power," Omnipotent characters can literally do anything, as they are considered the be-all and end-all of characters and most of the time, God. They are the absolute strongest beings in their respective fictional franchises.

In fiction characters can only be presumed omnipotent, as much like in theology it is impossible to prove. In the best case there can be an impressive definition.

However, the following will show some points of what philosophy says about it, from the paradoxes to the current notion that it has.

Omnipotence derives from Latin, and means "All Power," or "All Potency". Omnipotent, being derived from this word, would have meant near to "Almighty" or "That can do all".

Omnipotence is from the beginnings of monotheism, an incommunicable attribute of God, usually accompanied by other attributes – Omniscience and Omnipresence.

This divine quality would be the possibility of having in itself the ability to do all things. The main religions whose God is omnipotent are the Abrahamic religions.

Since the advent of classical atheism, several paradoxes have been developed, pointing to the presence of logical inconsistencies – contradictions – in this attribute, many of them concluding that it is impossible for real omnipotence to exist. The best known of such is the paradox of stone.

From this point of view, various aspects have emerged in the attempt to invalidate such paradoxes or point out other definitions for omnipotence, the main and most defended of these views being the scholastic side presented by Thomas Aquinas in his compiled Summa Theologiæ.

The following will go into a little more detail on each side.

The scholastic omnipotence is "logical" omnipotence, which is most defended in theology. One of his most notable supporters was the friar, philosopher and theologian Thomas Aquinas, considered one of the fathers of the Catholic church and one of the greatest theologians of all time. Thomas Aquinas is known for his gigantic work Summa Theologiæ, in which he made various objections to God, and answered all of them.

Considering also the classical view of omnipotence, they argues that God could accomplish only what is logically possible, thus not violating the principles of classical logic. Proponents of this position argue that just as contradictions can never be part of reality, they can not be considered entities - they are literally nothing. As nothing is the absence of being, the everything has nothing included and therefore being able to do "everything" does not include the realization of contradictions. The concern of the scholastics, before classifying power, is to make sense.

Thomas Aquinas affirms that God's omnipotence is based on the realization of acts in the absolute possible, but this does not include absolute impossibility.

First of all, Aquinas here didn't refer to the possible and impossible in the common sense, but to the metaphysical possible and impossible. It is impossible for us to practice levitation, for example, but it is not to that kind of impossible that Aquinas refers, for this kind of possibility is not a logical impossibility. The reference is to beings who don't fit into any possible world, such as a triangle whose hypotenuse is greater than the sum of the legs, or anything that violates the principles of classical logic such as noncontradiction. It is recommended that you read about the Possible World concept, proposed by Gottfried Leibniz.

Thomas also explained about this:

In other words, it would be possible for God to do anything, including the humanly impossible, as previously said. However, the logical impossible can not be put into power, and consequently can not be done, as St. Thomas explains shortly.

Additionally, the writer Clive Staples Lewis also wrote about omnipotence. C. S. Lewis is best known for his work The Chronicles of Narnia. In his book The Problem os Pain he took a vision similar to that of Thomas Aquinas about the divine omnipotence.

You may think that if the omnipotent is restricted or conditioned to something external to it, it invalidates its omnipotence. In fact, this makes sense from the semantics of the word. However, it should be remembered that the point is that nothing external to the omnipotent can constrain it, so that the only thing as great as it, is itself. In this line of reasoning, many scholastic philosophers believe that God must be the very set of necessary laws that governs existence, for they are above all else. The philosopher William L. Craig defends that the fundamental principles of logic and mathematics are representations of the way God reasoned. I.e., they are not external laws to God to which he is conditioned, or abstract objects that limit God, but rather that they are aspects of the mind of God.[4]

Despite having several advocates over the years, there is neither a principal representative of this point of view, nor so many advocates as scholasticism. The illogical view of omnipotence preaches that God could violate even the laws of classical logic, such as the law of noncontradiction the law of excluded middle, and the law of identity, and make mathematical absurdities like a triangle whose hypotenuse is greater than the sum of the legs.

The main defense to universal possibilism probably comes from René Descartes, expressed in his Meditations on First Philosophy. Among them, it would include the very creation of logical and mathematical truths, like the classical laws of thought.[5] In spite of his defense, Descartes' universal possibilism is considered absurd and unsustainable, as is the idea of absolute relativism, for he demands the negation of himself for his own affirmation, as W. L. Craig explains.[4]

St. Pier Damiani in De divina omnipotentia accused St. Girolamus of being blasphemous, for claiming that God could not undo what was done, i.e., accuse the past. For St. Pier Damiani, figures like St. Girolamus and Thomas Aquinas were blaspheming in trying to limitate God.

Cardinal Nicholas of Cusa in De douta ignorantia argued that God, being infinite, is coincidentia oppositorum. I.e., should have all existing properties, and between these properties should have properties of both being and non-being, both positive and negative. This logically encompasses properties that contradict each other. In this way, it would be possible for God not only to be contradictory, but also to create contradictory objects.

Think of omnipotence as the possibility of performing all acts that can be expressed by words that assume consistent meaning in potency, and to carry them out, it is enough for that power in act. This could explain some paradoxes such as the paradox of stone, so that God has in himself both the act of creating the stone and the act of lift it.

In addition, there are two current philosophical currents that can support the anti-scholastic view of omnipotence. These are paraconsistent logic and dialaletheism.

Paraconsistent logic is a non-classical logic that accepts and treats contradictions (DA SILVA FILHO, 1999), a logic is paraconsistent if its logical consequence relation (⊨, either semantic or proof theoretic) is not explosive (PRIEST et al, 2016). Dialetheism is the view that there are dialetheias. One can define a contradiction as a couple of sentences, one of which is the negation of the other, or as a conjunction of such sentences. (PRIEST 2017).[7]

Recently, limitations were seen in classical logic and in Aristotelian principles such as non-contradiction, which encouraged mathematicians to base paraconsistent logic, which deals with the explosiveness of contradictions, and dialetheism, which accepts that there are real contradictions. An example of such applications are the paradoxes of self-reference, such as the Liar paradox, which consists of the following:

Another example is Russell's paradox, highlighting the Barber's paradox, which derives from it.

Think of a situation where a city has only one barber, and men only have two ways to shave, 1) shaving alone or 2) going to the barber. This barber, however, does not shave anyone who shaves alone, and shaves all those who do not shave alone. If so, who shaves the barber? Because 1) if the barber shaves, it means he shaves himself, and therefore, he is not among the people he shaves; 2) if the barber doesn't shave alone, it means he's on the list of people he shaves.

Jean-Yves Beziau and Newton da Costa spoke about this in the 1st World Congress on Logic and Religion. In their words:

Another point is that this doesn't just apply to linguistics. Paraconsistent logic is also used in computing and artificial intelligence.

We may also notice situations in quantum physics where the principle of noncontradiction is violated, as is the case with the hypothetical experiment of Erwin Schrödinger's cat, that as long as there is no observer, the cat is simultaneously alive and dead. Note also the paraconsistency in the wave-particle duality, in which a quantum can behave as both wave and particle.

Dialetheism, however, does not accept that all contradictions are true, and therefore must be distinguished from trivialism. And already mentioned philosophers such as St. Pier Damiani and Nicholas of Cusa were considered by Graham Priest as having taken positions close to the current dialetheism.[7]

In conclusion, there is enough philosophical and logical basis to assume that omnipotence may violate the principle of non-contradiction. For that, it would suffice that she was paraconsistent. Since paraconsistency is an area of logic, we can not even say that it is illogical, since logic in its entirety encompasses much more possibilities than the classical laws of thought, and of classical and Aristotelian logic.

In the Kabbalistic system there is a thing (God or one of the attributes of God) called Ain Soph. It means boundlessness.

This is a strictly philosophical and theological term. There are not important feats or bulky descriptions about superiority over logic (or anything else).

It is just an attempt to create a model of an Absolute God. It is boundlessness beyond all perspectives or any other concepts. Any description (including any words that we may provide here) will be limited.

Transcendence, increased scale, multiplication by infinity, or any other option is meaningless. Boundlessness already includes all of those actions and is still boundless compared with any such options in any way.

But in addition to Ain Soph there is also Ain. Absolutely "nothing". Not even boundlessness, not everything, not nothing, just "not". You can not say or think anything about Ain (any words and thoughts are limited), you can only keep silent about Ain.

Or to put it in simpler terms: Omnipotence has no relation to something like "A character just destroyed 100500 Omniverses".

In addition, if an author simply mentions the word "omnipotence", this is obviously not enough to justify that some character remotely fulfills the requirements for Tier 0, as the understanding of different authors can be very different. The author should also make clear that the entity is totally qualitatively superior to everything else. Completely unlimited, not just playing on the same field as other powerful beings from that fictional verse.

Why we avoid using the term

Despite the many theological and philosophical perspectives regarding omnipotence and its paradoxes, the term is something that is completely impossible to prove or demonstrate on any conceivable level.

By its very definition, it is something that cannot be used to measure a character, and claims of omnipotence, no matter how complex or developed, should never be viewed as evidence.

In addition, our system is built on hierarchies, with tier 0 defined as possessing absolute transcendence above all other beings within the system, but raw power and stature do not necessarily carry over to the complete versatility of omnipotence.

Thus, within this Wiki even characters with the highest Tier 0 ranking do not have the term listed among their powers and abilities.

Retrieved from "https://vsbattles.fandom.com/wiki/Omnipotence?oldid=6772406"
Community content is available under CC-BY-SA unless otherwise noted.