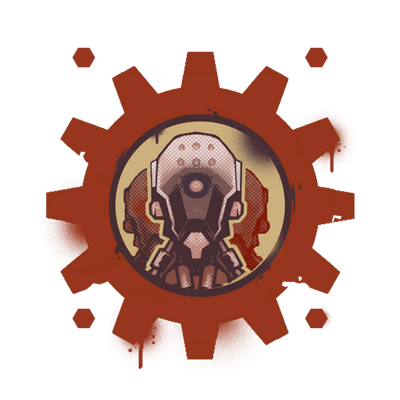 The Omnics are a race of sentient machines that were originally created by the Omnica Corporation to serve humanity. The company created massive factories known as omniums to mass produce Omnics. In time, however, the omniums began to malfunction, and analysts determined that their growth and output would never be able to meet corporate projections. Investigations followed, uncovering evidence of corporate fraud and leading to the forcible dissolution of the Omnica Corporation and the dismantling of the omniums.

The omniums would later reactivate themselves and launch a military campaign against humanity in a worldwide conflict that would come to be known as the Omnic Crisis. The ensuring war proved to be a troubling time for humanity, with the war tilting in the Omnics' favour. However, the Omnics eventually lost the war after Overwatch took down the Omnics' command and control protocols.

Now, Omnics live alongside humanity. Some live peacefully with humans in places such as Numbani. Others like Null Sector, still feel like they are treated unequally in this new era and seek to forcefully claim rights for their own.

Civilization Type: At least Post-Industrial Civilization (Were it not for Overwatch, the Omnics would have taken over the world)

Territory: Various parts of Earth, however they would have completely taken over the planet were it not for Overwatch

Technology/Abilities: Superhuman Physical Characteristics, Weapon Mastery (Guns, Cannons, Missiles, Blades, etcetera), Hacking, Flight, Transformation (For Bastion units), Healing (Omnics like Bastions are capable of self healing, while others like Zenyatta are capable of harnessing Omnic Energy to heal others), Reactive Evolution and Adaptation (Human forces were said to have been pushed back by the continuous evolution of Omnic forces. The OR14 units were made in response to the Crusaders' ability to charge Bastion units), Forcefield Creation (Eradicators are capable of creating a barrier field), Large Size (Type 2 [Omnic Titans are this big]), Omniums are capable of mass producing Omnics and carrier crafts to transport said Omnics to battle, Omnic weapons include pulse cannons, machine guns, lasers, anti-air cannons, etcetera, Omnics could also quite possibly utilise the same abilities as Zenyatta (Overwatch), which would include Telekinesis, Regeneration (Low), and Status Effect Inducement

Attack Potency: Large Building level, to at least Large Building level (Bastion units and OR14s are capable of harming Overwatch heroes such as Reinhardt and most infantry units can be compared to the likes of Bastion and Orisa) | Multi City-Block level (The Titan Omnic is this powerful. The Colossal Omnic that appeared in Korea has never been defeated by MEKA and is constantly adapting itself with every assault), possibly much higher (Humanity was losing the battle against the Omnics even with their resources, which should be more advanced than our modern day resources considering the fact that Overwatch takes place in a future version of real life.)

Power Source: "Omnic Energy" (Quite possibly some form nuclear energy, as a destroyed omnium in Australia turned the Outback into an "irradiated wasteland")

Industrial Capacity: Omniums are capable of building enough Omnics to start a world war within a short period of time. They are also capable of creating new and adaptive Omnics over time through learning about their environment and their opponents.

Military Prowess: There are multiple omniums located around the world that are capable of mass producing to fuel a world war for multiple years.

Weaknesses: Omnics are prone to hacking and vulnerable to EMPs. 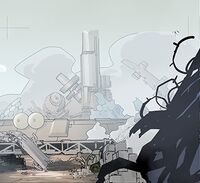 One of the many omniums located around the world

The Colossal Omnic that attacked Korea