VS Battles Wiki
Register
Don't have an account?
Sign In
in: Image Comics, Characters, Male Characters,
and 20 more 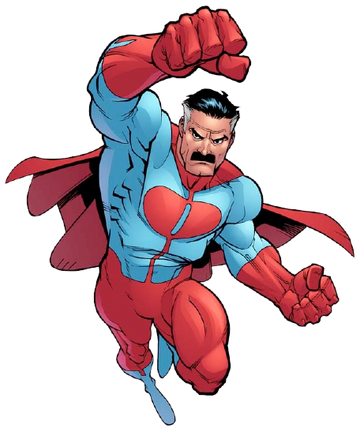 Omni-Man (Nolan Grayson) is a fictional character in the Image Comics Universe. Omni-Man is the father of Invincible and a member of Viltrumite race, born on the planet Viltrum.

His father, Argall, was the Viltrumites' leader. When he was very young, his father was killed by a turncoat, who no longer believed in the Viltrumites' violent ways. Nolan was too young to remember anything about his father. His true heritage was hidden from records in order to hide him from Viltrumite enemies.

Powers and Abilities: Superhuman Physical Characteristics , Enhanced Senses, Flight, Longevity, Regeneration (Mid-Low), Can hold his breath for 2 weeks, Telepathy (Has alien technology in his ear, allowing him to transmit and hear other's thoughts), Reactive Evolution (Viltrumite DNA aggressively repairs itself over time for different contexts, such as reproduction with other species or long-term survival), Resistance to Absolute Zero and High Heat (Smart Atoms release energy so Viltrumites can survive extreme conditions, however, there is an upper limit to the temperatures they can withstand)

Attack Potency: Planet level (Somewhat comparable to Thragg, and has managed to damage him. Destroyed Viltrum along with Mark and Thadeus)

Speed: Massively FTL+ (Flew from earth to another planet with life on it in a week)

Durability: Planet level (As durable as his son)

Intelligence: Gifted (Mastery of various Viltrumite combat techniques and skills, thousands of years of experience fighting both powerful and diverse enemies who have various abilities and powers.)