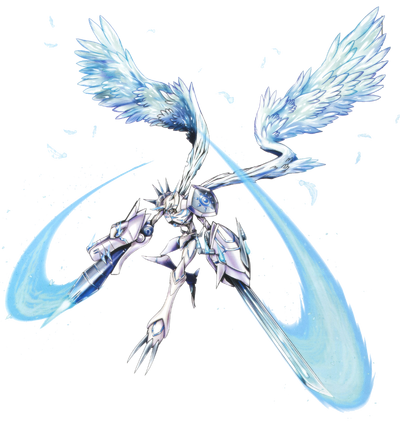 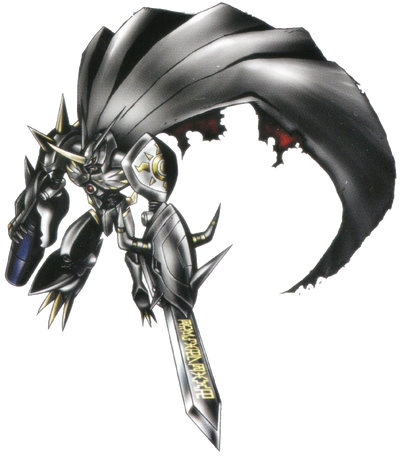 Omegamon is a Holy Knight Digimon and a member of the Royal Knights and the product of the merging of the Virus Hunters WarGreymon and MetalGarurumon, due to the powerful desires of everyone to do good. It is a Digimon that has combined the skills of both bodies, so it's a multipurpose warrior able to demonstrate the full capacity no matter what situation it finds itself in. It is equipped with a sword and shield in his left hand which is shaped WarGreymon, and a cannon and missiles in his right hand is shaped MetalGarurumon. The layer bearing equipped on his back when dodging enemy attacks unfolds. Its special technique is to freeze its opponent with frigid blasts reaching absolute zero, from its cannon arm, the Garuru Cannon. Its left arm is equipped with the invincible Grey Sword.

Age: Varies between media - Said to be 10,000+ years old in Digimon Chronicle/Digimon D-Cyber

Superhuman Physical Characteristics, Digimon Physiology, Flight, Immortality (Type 1), Precognition (Can work on those with Type 4 Acausality), Fire Manipulation, Can shoot out frigid rounds at a temperature of Absolute Zero from the Garuru Cannon, Enhanced Senses (able to track people across the world and other dimensions), Can travel to concurrent universes (Can open voids to the Real World from the Digital World in Savers/Data Squad), can create holes in dimensions with his energy blasts, Can BFR people to other dimensions, Acausality (Types 1 and 4. Unaffected from the entire Multiverse being reset. The Royal Knights can travel between past, present and future, make changes in history at all moments and be unaffected. Royal Knights exist in the Kernel, within the Yggdrasil System outside the New Digital World, which means they exist outside the past, present and future), Blade Retraction, Statistics Amplification, Can cut through space and dimensions, Dream Manipulation, Can use All Delete for the complete deletion of a universe and re-create it can delete/reset individual beings as well, Durability Negation, Existence Erasure, Can kill Abstracts (Types 1 and 2), Transmutation and Power Nullification via Texture Blow (Can use an explosion of light energy that turns the opponent into a Dot/Sprite unable to use any skill), Empathic Manipulation (Using the Omega InForce energy can destroy the fighting spirit of an enemy), Resistance to Existence Erasure, Power Nullification, Death Manipulation and Absolute Zero.

All previous abilities amplified, Higher Resistance to Existence Erasure (Those with the X-Antibody can resist multiple levels of Program X/Particle Worm which is a mass erasure technique from Yggdrasil. This technique is so powerful that it even threatens the likes of Beelzemon who needed to gain the X-Antibody to survive it) and Power Nullification (Can resist the effects of Particle Worm in which also negates all the abilities of those effected).

Speed: Immeasurable (All the Royal Knights are able to traverse through space time and move within areas that exist beyond space time. Capable of matching Demon Lord class Digimon, who are natives of the Dark Area, which is without time) | Immeasurable | Immeasurable (Comparable to Alphamon, who transcended space and time. Regularly travels throughout the past, present and future to access the terminals in Pendulum-X)

Standard Equipment: Grey Sword (Transcendent Sword): A powerful sword marked with ancient Runes. It is strong enough to deflect hundreds of Catastrophe Cannon blasts from the Ultimate/Mega Digimon Diaboromon (Also an Attack), Garuru Cannon (Supreme Cannon): A powerful Cannon that can shoot energy blasts powerful enough to destroy entire mountains and Armies of lesser Ultimate/Mega Digimon. It can also be used to fire an absolute zero blast of icy energy much like MetalGarurumon, his cape, which enables him to fly and allows him to block attacks as severe as Absolute Zero with ease | X Antibody

Intelligence: Omegamon is an expert swordsman and marksman who holds seniority over many of the Royal Knights and a capable tactician. He can easily fend off attacks from other powerful Megas like WarGreymon X and MetalGarurumon X and defeated Gallantmon within the span of seconds and is recognized as one of the most skilled and powerful amongst the Royal Knights as a whole. However, he is absolutely loyal to Yggdrasil and will follow his orders to the letter unless he is given solid evidence to do so otherwise.