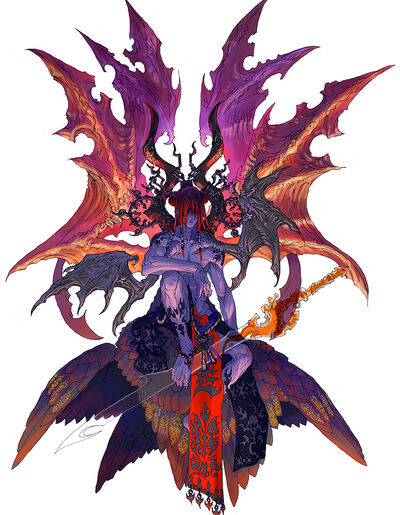 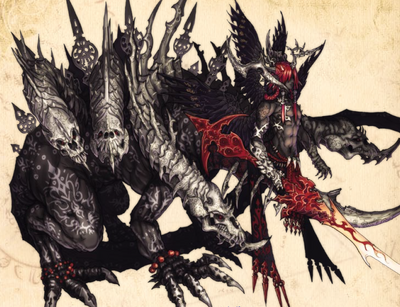 Age: Over one thousand years old

Powers and Abilities: Superhuman Physical Characteristics, Regeneration (High-Mid), Ki Manipulation including Detection, Aura (Anyone within his aura run the risk to be affected by Speed Reduction, Fear Manipulation, Paralysis Inducement and being knocked out), Statistics Amplification, Overwhelming Presence, Non-Physical Interaction and Enhanced Accumulation (Omega always accumulate and regenerate Ki no matter its condition) along with Negation Immunity to it; Swordsmanship, Flight, Regeneration (At least Low-Mid), Immortality (Type 1, 3 and 9 [The Shadow and Lucider are projections of the real Omega]), Invulnerability (Can only be damaged by attacks capable to damage energy), High Resistance to Poison Manipulation, Disease Manipulation, Void Manipulation, Time Manipulation (Beings of elevated gnosis can survive being in the Primordial Void for few days. Beings of elevated gnosis can resist to time powers as well as being aware of change in the timestream), Magic and Mind Manipulation, Enhanced Senses, Extrasensory Perception, Time Deceleration, Teleportation, Statistics Amplification (The lower his health is, the stronger he gets) | All the powers from the previous form, Enhanced Resistance to Time Manipulation (Aside from being aware of the changes of the timestream, any damage performed by beings of gnosis 40 or higher can be negated by the manipulation of time), Large Size (Type 1 [Over 16 meters tall]), Regeneration (Mid, only the Dragon heads), Invulnerability (As long one of the Dragon heads, Omega's core can't be damaged), Elemental Manipulation including Fire Manipulation, Extrasensory Perception (Beings of gnosis 40 or higher are capable to perceive what happens in several planes of existence simultaneously, being capable to attack or defend even if its enemy is localized in another dimension), Air Manipulation, Ice Manipulation, Holy Light Manipulation and Darkness Manipulation; Gravity Manipulation | The same powers of its Shadow, Fate Manipulation, Probability Manipulation, Time Manipulation (Time Slow and Time Rewind), Forcefield Creation, Existence Erasure, Reactive Evolution (Spells and techniques don't work twice against him), Spatial Manipulation (Can attack with Longinus without the need to be in melee range. These attacks ignore armor and barriers), Chaos Manipulation, Limited Death Manipulation (The first time he appeared in Gaia caused the death of countless of unborn children across the globe) and Resistance to it (Possesses an Existential Barrier that prevents him from getting one shotted). Longinus has Negation (Anything damaged by the weapon loses its magic, psychic, ki, supernatural and divine powers, negating any protection or immunity)

Attack Potency: City level (Just slightly weaker than Zhoul Orgus), Mountain level with the Shadow of Longuinus. Higher with ki techniques | Country level (One of the stronger Sleepers, superior to Rudraskha using Exudus Void Nova), Large Country level with Longuinus (Stronger than Ergo Mundus) | Large Country level (One of the strongest beings that set foot in Gaia. It would have been needed the 11 Apostle to defeat him, however, Imperium sealed him first. A major menace than Sigma, a meteor that was going to wipe all life in Gaia), likely Continent level with Longuinus. Far higher with ki techniques

Standard Equipment: Longinus, one of the 11 Pillars of Souls, was the weapon used to kill Christ, can take any form that the wielder desires. Designed to kill Gods, it nullify the powers of everything it damages no matter its protections or immunities. The Shadow of Omega can project this weapon, however, it can't use any of its powers

Weaknesses: Certain abilities such Reactive Evolution, Existential Barrier and Null Tempus can be ignored by beings of equal or higher Omega's level of Gnosis

Start a Discussion Discussions about Omega (Anima: Beyond Fantasy)