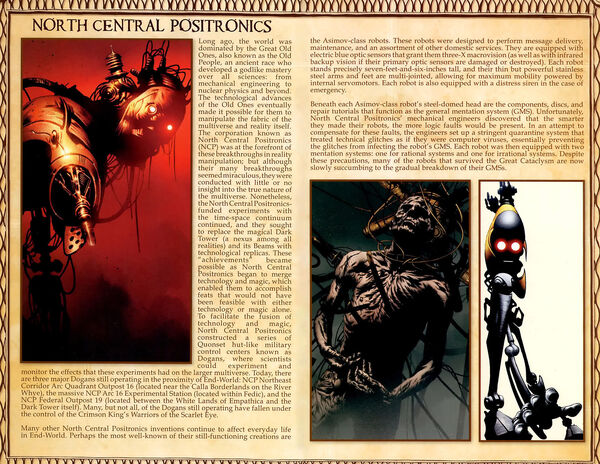 The Old Ones (sometimes referred to as the Great Old Ones and the Old People) were an ancient civilization of hyper-advanced humans that ruled All-World many centuries before the events of The Dark Tower. Known in their time as The Imperium, their empire's influence and reach spanned countless worlds throughout the multiverse.

While many of their initial ventures (such as the successful cure of cancer and the near-discovery of the secret to immortality) were fairly well-intentioned, their mastery over technology and their exploits of fusing magic and science eventually led them to become self-important and overconfident in their abilities. Their research began to move towards the perverse and the destructive, and soon enough they sought to alter the very fabric of the multiverse with their technology. This, the poisoning of their environment as a result of their endeavors, and an eventual mass war now referred to as The Great Cataclysm were the major contributing factors which led to the Old Ones' demise.

While countless years have passed since the Old Ones brought about their own extinction, much of their technology has managed to remain operational, albeit with the majority of it having deteriorated in the same manner as the rest of the world.

Tier: Typical infantry-level weapons and measures are at least 9-B. Combat-oriented robots and cyborgs range from 9-B to 8-C. Average psychics peak at 8-C. The most powerful psychics have the capacity for 7-B and possibly even Low 5-B destructive power. Highest-end technology is capable of reaching High 1-B energy output.

Name: The Old Ones, The Imperium

Age: Unknown. Explained as having existed "yet a hundred generations before the world moved on", but the exact duration of their reign is never fully elaborated upon, and all specific dates relating to their rise and fall are left unmentioned.

Territory: Countless worlds throughout every floor of the Dark Tower.

Technology/Abilities: War-machines, planes, spacecraft, numerous forms of robotic and cybernetic creations (including messenger robots, maintenance drones, hunter-killer robots and the combat-centric Wolves, as well as Beam Guardian replicas such as Shardik), GPS devices, cloaking technology, infrared vision technology, Energy based weapons (including laser firearms and energy swords known as "light-sticks"), Flying, target-seeking Sneetches which can carve away flesh, explode on-contact and/or detonate via timer, Monorails capable of traveling well over 800 miles per hour, Doors which lead to countless universes and time periods, Thinking Caps designed to block telepathy and other mental intrusions, viruses and biological weapons which cause death seconds after inhalation, Drag-On-Tanks which suck people into them and "shoot them out as charred remains", Mind-Traps which manifest a person's worst fears into illusions that kill them, Basilisk Rays which turn their targets into stone, Banshee Bombs that emit a sonic frequency which causes flesh to explode, fully-sentient A.I. programs with variants capable of erasing the circuits of other advanced technologies, equipment built to measure the potential of specific latent powers within an individual, pills made to enhance psychic abilities, machines designed to harness and weaponize psychic energy, Dogans designed to fuse magic with technology and act as control centers/bases of operations, other machines capable of extracting latent chemicals from the brain, granting psychic powers to normal humans, "faxing" unborn children from one carrier to another, turning Non-Corporeal spirits mortal and manipulating the fabric of reality itself (the latter of which includes technological Beams created to sustain all of existence), and reactors capable of affecting the entirety of the multiverse, as well as countless other technological advancements and achievements. Their armies were also likely to have possessed psychics and telepaths within their ranks, the likes of which have been shown levitating, communicating telepathically, reading the minds of others, detecting spirits, breaking hypnosis, amplifying the telepathic powers of those within their proximity, generating fires at will, wielding telekinesis, utilizing mind control, planting illusions within other people's minds, seeing the future, causing explosions, sealing spirits in "mental lockboxes", teleporting across the multiverse and creating "balconies" located outside of all known reality, as well as resisting mental attacks and power absorption.

Attack Potency: Typical infantry-level weapons and measures are at least Wall level. (Among their security systems were "razor-beams" powerful enough to cut a person "clean in half". Sneetches "can strip a man from top to toe in five seconds" with their blades, "leaving nothing around him but a circle of blood and hair", and their explosions are enough to obliterate human bodies and completely fragment the heads of steel beings.) Combat-oriented robots and cyborgs range from Wall level to Building level. (Physically, robots such as the Wolves and their horses should be far superior to the likes of Roland Deschain, while more powerful combat machines are most likely comparable to the cybernetic Beam Guardian Shardik, who "stood seventy feet high" and whose body was largely made up of steel.) Average psychics peak at Building level. (Old Ones with moderately powerful psychic abilities should be at least somewhat comparable to Sheemie Ruiz, who could create a pocket reality containing a two-floor house and its surroundings with his mind, as well as a young Charlie McGee, who completely obliterated a twenty-five room residence and could "produce 30,000 degrees of spot heat without even trying".) The most powerful psychics have the capacity for City level and possibly even Small Planet level destructive power. (Examples of high-grade psychics would include Tyler Marshall, who caused a miles-wide reactor that reached "up into the clouds" to explode, and a much older Charlie McGee, who was theorized to have the power to cause nuclear explosions and even "crack the very planet in two" if she were to ever reach her full potential.) Highest-end technology is capable of reaching High Hyperverse level energy output. (Their technological prowess allowed them to create their own replicas of the beams that support the Dark Tower, which contains endless layers infinitely above the previous layer, with each layer also housing immeasurable parallel realities. The technology utilized by the Warriors of the Scarlet Eye appears to have its roots in that of the Old Ones; said technology includes the machines in Algul Siento which can harness and weaponize enough psychic energy to damage and weaken the aforementioned Beams, as well as the Crimson King's power plant which affected "multiple dimensions throughout infinity" upon its destruction. The final war which resulted in their demise left much of existence in a state of disrepair.) Many of their weapons and powers can ignore conventional durability. (They possessed instantly-fatal biological weapons, illusion technology capable of causing heart failure, energy-based "light-sticks" implied/stated to damage materials on an atomic level, "basilisk rays" which turn victims into stone, and "banshee bombs" which emit a sonic frequency that causes all flesh within radius to explode. Ted Brautigan was capable of throwing "mind-spears" which could kill their victims almost instantly, and the Old Ones most likely included numerous people with psychic abilities similar to his.)

Power Source: Various. Their technology is said as well as shown to be capable of drawing power from sunlight, reactors, the minds of children and psychics, and even the Beams themselves.

Military Prowess: Unknown, but most likely immeasurable by conventional standards. The war the Old Ones waged amongst themselves is implied to have spanned the majority of the multiverse, if not its entirety.

Weaknesses: Despite all of their technological advancements, the Old Ones themselves were merely human, with all the limitations and weaknesses that entails. While the true scale of their artillery is left vague, the majority of their infantry-level weapons which appeared in the series were designed for combating decidedly human threats. The overwhelming majority of their robots and cyborgs were outfitted with radar dishes which, if severely damaged, would cause them to malfunction and die. Their A.I. technology was too advanced for its own good; a number of their sentient machines possessed genuine logical and personality-based flaws which have shown to be exploitable throughout the series. The emissions produced by their technology poisoned their environment to such an extent that the Old Ones themselves became sterile, leading to their demise after a series of nuclear and chemical catastrophes.

Start a Discussion Discussions about Old Ones (The Dark Tower)