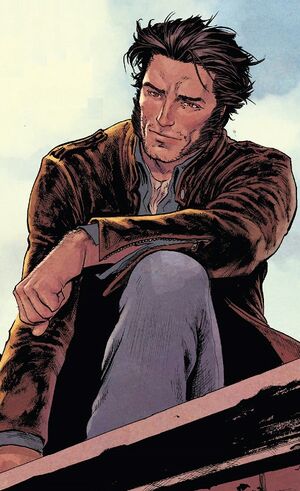 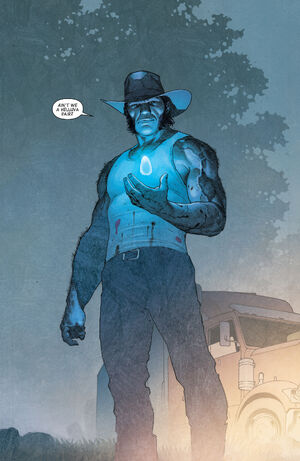 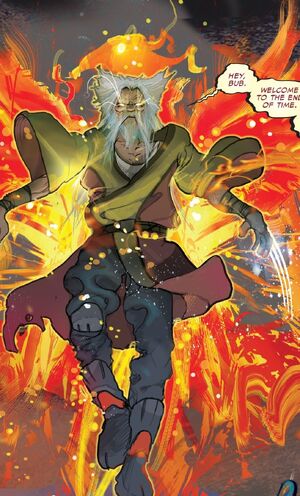 Logan died under unknown circumstances, but he was later chosen to become the new host for the Phoenix Force. After that, he spent the eons traveling the universe, wiping out celestial bodies to aid the universe as it met its slow death due to entropy.

Eons after becoming the new host of the Phoenix Force, Logan encountered a future version of Loki responsible for the death of several people during his quest for the Infinity Stones. After seeing something that almost broke him, Loki begged Logan to go back in time in order to stop him from collecting the stones. Because he wanted to avoid the death of several innocents caused by Loki's actions, Logan extinguished his flames and went back in time.

Powers and Abilities: Superhuman Physical Characteristics, Natural Weaponry, Enhanced Senses (Wolverine possesses animal-like senses such as night vision as well as hearing and a sense of smell comparable to an actual wolverine's. Can smell whether a person is lying, and detect emotions and feelings and can even track a person from the lack of their scent), Longevity, Immortality (Types 3 and 4), Regeneration (Low-High; can regenerate from having his heart destroyed, and Old Man Logan, who has a weaker healing factor, can regenerate from being shot in the head with a healing factor negating bullet after having it removed. Regenerated cell by cell after being reduced to a near skeleton by Nitro's self-destruction. Regenerated from being reduced to a skeleton by Doom's hellfire), Master Hand-to-Hand Combatant (Stated by Captain America to be one of the most skilled opponents he ever fought. Can clear the danger room at its maximum settings alone), Stealth Mastery (Can disappear before his opponents eyes. Infiltrates a UN conference and the Avengers Tower), Weapon Mastery (Bested Silver Samurai, can beat several swordsmen blindfolded and possesses an impeccable aim), Pressure Points (As shown here. Knocks out Captain America by giving him an aneurysm), Instinctive Reaction (Can move without thinking, thanks to his instincts, training, reflexes and experience, states he can move faster than he thinks), Rage Power (As explained here), Berserk Mode (Possesses a "Berserker Rage" that renders him feral, fighting purely on instinct and becoming difficult for even the most powerful telepaths to control), Fire Manipulation, Reality Warping, Flight, Spaceflight, Telekinesis, Telepathy, Cosmic Awareness, Matter Manipulation, Self-Sustenance (Types 1, 2, and 3), Resurrection, Mind Manipulation, Time Manipulation, Energy Manipulation, Energy Projection, Forcefield Creation, Time Travel (With the Time Bat), Spatial Manipulation (With the Space Stone), Teleportation (With the Space Stone), Statistics Amplification (Can increase his speed with the Space Stone), Gravity Manipulation (With the Space Stone), Black Hole Creation (With the Space Stone), Resistance to Mind Manipulation (As explained here. His feral psyche actively attacks an invader. Resists Emma Frost), Pressure Points (As shown here), Poison Manipulation (As shown here), Radiation, Disease Manipulation (Resists spore, a disease which infected the Eternals, resists Contagion virus and can resist lycanthropy), and Soul Manipulation (His soul was unaffected after he was reduced to a skeleton by Hellfire)

Attack Potency: Multiverse level+, possibly Low Complex Multiverse level (Fought and nearly killed Old King Thor, only failing to do so because the Phoenix Force would not allow him to kill Thor due to him wielding the Odinforce. Fought and killed numerous Celestials)

Speed: Massively FTL+ (Capable of keeping up with Old King Thor. Should be comparable to Jean Grey. His power with the Phoenix Force instantly grew to the size of a galaxy)

Intelligence: Gifted (Logan possesses all of the skill and experience of his Earth-616 counterpart on top of the experience gained from traveling through time and living for millions of years stopping threats all across the universe)

Weaknesses: Will cease to exist if his Earth 616 counterpart is killed.

Retrieved from "https://vsbattles.fandom.com/wiki/Old_Man_Phoenix?oldid=6320656"
Community content is available under CC-BY-SA unless otherwise noted.