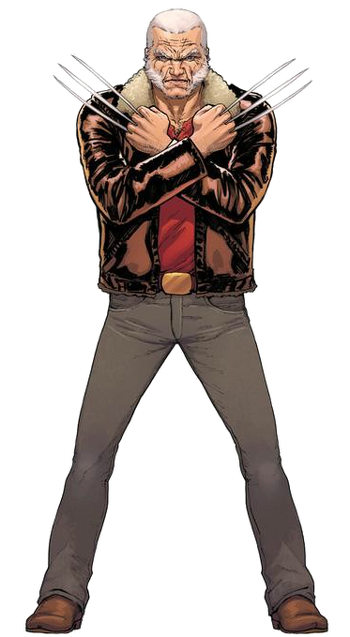 Old Man Logan is an alternate-universe version of Wolverine. His story takes place in a universe which used to be identical to Earth-616.

Age: Unknown, considerably older than his past self

Powers and Abilities: Superhuman Physical Characteristics, Enhanced Senses, Regeneration (Mid; he regenerated from being shot in the head by a healing factor negating bullet after it was removed), Longevity, Immortality (Type 3), Resistance to Telepathy

Attack Potency: Building level. Solar System level with Adamantium claws (Should scale to his past self)

Speed: Massively Hypersonic+ (Scales to his past self and can keep up with Spider-Man)

Durability: Building level. His Adamantium skeleton can presumably withstand Solar System level power (By scaling from his past self and Ultron)

Stamina: Very High (Scales to his past self. He can fight with several broken bones and even while impaled.)