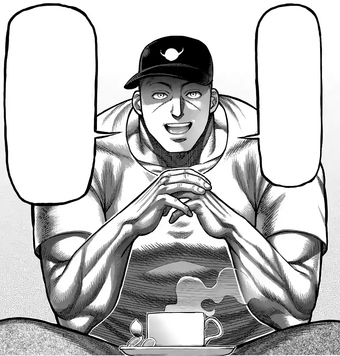 Okubo Naoya, also known as The King of Combat, is the Absolute Champion of the Ultimate Fight MMA promotion. He represented Muji TV as their affiliated fighter during the Kengan Annihilation Tournament. Okubo is a goofy and seemingly unwise person, losing his cool when playing Shogi. With a similar personality to Rihito, who he gets along well with, he is also a pervert. However he is extremely perceptive where fighting and martial arts are concerned. Okubo is also quite driven and determined, not losing his fighting spirit after being defeated by the Fang.

Powers and Abilities: Superhuman Physical Characteristics, Extrasensory Perception (Okubo has a natural sense of danger, capable of knowing if the opponent is dangerous or not just by their looks), Aura and Expert Martial Artist

Speed: Hypersonic+ (Punched Agito to the head before he could react)

Stamina: Very high. Able to fight after he took hits from Agito which is compared to meat cleaver.

Intelligence: Gifted. Okubo is expert at mixed martial arts, especially in grappling. He emphasizes in overwhelming strength of his basic attacks, making his every hit not that flashy but lethal. His attacks are ever changing with little to no breathing room, making even Agito who is an expert at combat in disadvantage.