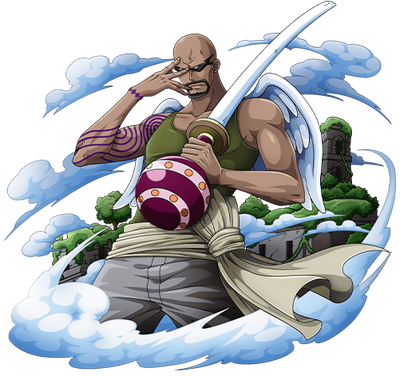 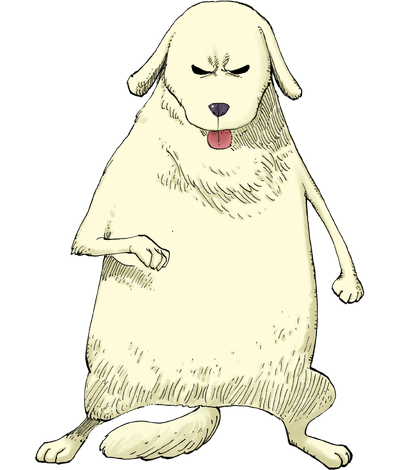 One of God's Priests. Ohm is one of the 4 Priests responsible for the security of Upper Yard in Skypiea. He ran the Ordeal of Iron, which had the lowest percent rate of survival out of all of the Ordeals... 0.

Chopper and Zoro took on his Ordeal, and while the former lost easily, the latter overpowered Ohm's Dial-powered sword and defeated him. After the battles were over, Ohm was banished to a desert cloud.

Powers and Abilities: Superhuman Physical Characteristics, Expert Swordsman and Dial user, Adept Kenbunshoku Haki User, Limited Matter Manipulation (Is able to change the shape of his sword for offensive or defensive measures that would fit the situation).

Attack Potency: Small Town level (Stronger than any of the other Priests. Casually defeated Skypiea Tony Tony Chopper with one blow and could injure Skypiea Roronoa Zoro)

Speed: Massively Hypersonic (Pressured Roronoa Zoro and kept him on the defensive for the majority of their fight)

Intelligence: He is an expert at combat and setting up traps. He is the most successful at using his Ordeal as compared to any of the other priests

Weaknesses: None notable, but his dog is susceptible to listening to commands made by others

Ordeal: Each of the priests has an ordeal in which they utilize clouds and dials in creative and devastating ways. Ohm uses the Ordeal of Iron.

Eisen Whip: Ohm's sword. It possesses a Milky Dial that emits his iron cloud blade, which he can change the form and range of.

Retrieved from "https://vsbattles.fandom.com/wiki/Ohm?oldid=5361341"
Community content is available under CC-BY-SA unless otherwise noted.