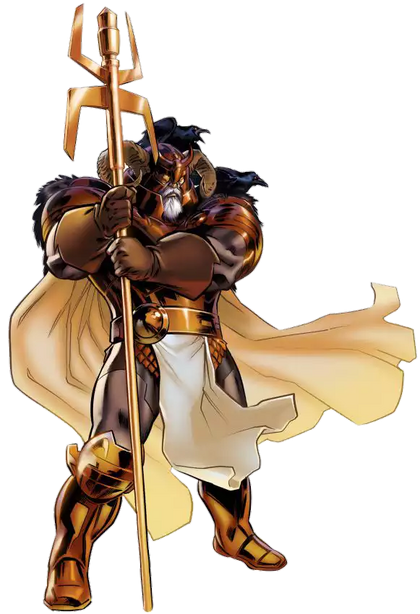 Powers and Abilities: Superhuman Physical Characteristics, Technopathy, Biospheric energy projection, magical and cosmic energy manipulation, Matter Manipulation, Time Manipulation (including Time Stop, Time Travel, and Time Reversal), Telepathy and Mind Manipulation (enough to mentally dominate the populations of entire planets and affect Galactus), Cosmic Senses that extend at least throughout the universe, Shapeshifting, Teleportation, Absorption (Absorbed the power and essence of Surtur), Telekinesis (strong enough to fling people across universes), ability to cross universes (and take other things with him, including the entirety of Asgard, or the entire population of Earth), Reality Warping (not as potent as the powers of higher cosmic beings, but still very powerful), Sealing (able to seal entire universes), able to grant power and Immortality to others and create empowered objects (such as arrows that never miss their targets), Can heal others, Precognition (non-combat related, can see thousands of years into the future with almost 100% precision), and various other magic related powers, Resistance to Sealing (Broke from being imprisoned within a block of pure force)

Attack Potency: Low Multiverse level (Fought a protracted battle against Surtur, who was powered by the Eternal Flame and was capable of destroying the nine realms, which are complete universes. Generated enough power with the Scepter Supreme to rival the Eternal Flame and prevent it from reaching Surtur. Forcefully channeled Surtur's flame into Asgard-space to be nullified before it destroyed all nine realms as well as the World Tree connecting them)

Speed: Massively FTL+ (Sent Thor to Earth at this speed. Also at least scales to his son. Flew across the universe in a matter of minutes, while fighting Forsung the Enchanter. Pulled planets from the edge of the universe to his location in a split-second)

Lifting Strength: Class Y (At least as strong as Thor)

Stamina: Extremely High, but needs to be replenished once a year with the Odinsleep

Range: Multiversal+ (the shock waves of his attacks can reach every plane of reality)

Standard Equipment: His spear Gungnir, the Scepter Supreme, the Odinsword

Weaknesses: Odin is superstitious, and he used to be bound to the Ragnarok Cycle.