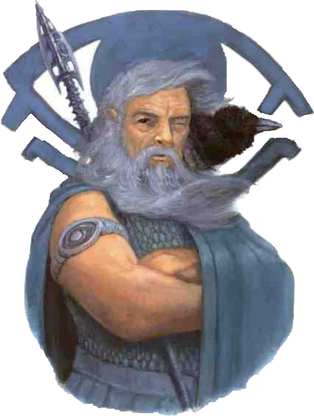 Odin is the leader of the Norse Gods and one of the most powerful deities in the Dungeons and Dragons lore. A wise and powerful ruler, he guides his people until the fated day of Ragnarok when he must die in battle against Fenrir.

Attack Potency: Planet level (Capable of battling the Leviathan, which would have destroyed the world should it awaken) | Multiverse level+ (Considered to be a peer of Zeus and one of the strongest gods. His Divine Rank is superior to Mystra whose death reordered the Multiverse)

Speed: At least Hypersonic+, with High Hypersonic+ reactions (Vastly above people who can dodge Call Lightning) | Infinite (Vastly superior to the likes of Labelas Enoreth)

Striking Strength: Planet Class | Multiversal+ (Can harm beings of this level with nothing but physical attacks)

Intelligence: Supergenius (Has an Intelligence score of 44, which is one point higher than Vecna, vastly Smarter than the Elder Brain which has an Intelligence Score of 21; This puts him at such an advantage over the Elder Brain that the difference between said Brain and himself is the same as the Brain's difference from the average ooze. Is said to be able to see quite literally everything and is rated above the likes of Gond, a deity capable of creating any feasible technology of any caliber with any effect, capable of matching any spell, including the causality-bending effects of Wish)

Start a Discussion Discussions about Odin (Dungeons and Dragons)