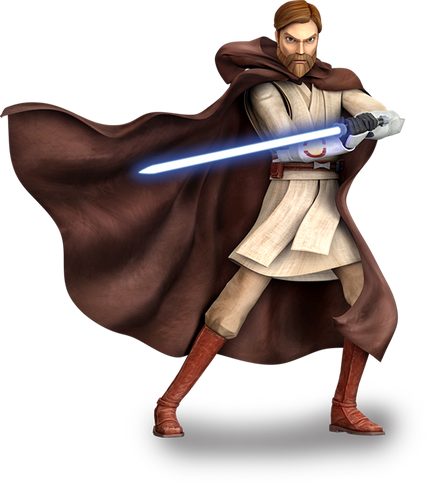 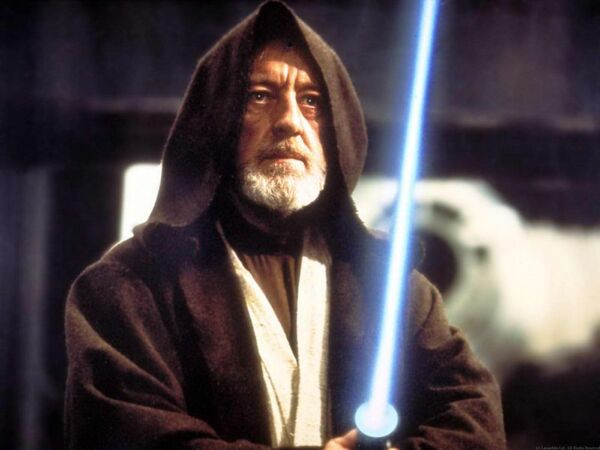 Obi-Wan "Ben" Kenobi is a fictional character in the Star Wars universe. In the original trilogy of films, played by Alec Guinness, he is a mentor to the protagonist Luke Skywalker, initiating him into the ways of the Jedi, while becoming one of the main protagonists of the prequels. In the prequel trilogy, played by Ewan McGregor, he is master and friend to Luke's father, Anakin Skywalker. He is frequently featured as a main character in various other Star Wars media. Obi-Wan is also the deuteragonist in the TV show Star Wars: The Clone Wars as well as a supporting protagonist in Star Wars: Rebels

Attack Potency: Large Town level (As of his mission to Pijal [seven years before the events of The Phantom Menace] Qui-Gon noted that he was powerful for a Padawan of his age and seemed on the level of a full knight when fighting against Pijal's Blackguards. As of the Invasion of Naboo, he was able to briefly contend with Maul. Qui-Gon Jinn stated that Kenobi at this point would make an exceptional Jedi Knight and quickly surpass him. Should be comparable to Anakin Skywalker as of the end of the Clone Wars. Telekinetically stalemated Anakin during their duel on Mustafar) | Large Town level, possibly Mountain level (Fought Darth Vader, though he was outclassed) | At least Planet level (Telekinetically stalemated a Darth Vader that, while emotionally compromised, was still well above his Padawan self in raw power. Superior to Yarael Poof, Kit Fisto, and Shaak Ti. Almost certainly the strongest Jedi Council Member besides Yoda, Mace Windu and Anakin Skywalker. Comparable to Count Dooku and even in advanced age was capable of stalemating ANH Darth Vader. Has defeated Asajj Ventress, Darth Maul, Durge and General Grievous multiple times)

Speed: Subsonic running speeds with Force Speed (During the coronation of Princess Fanry, he moved and attacked Captain Deren at such a speed which Qui-Gon noted normal human eyes would not have been able to process. Seven years later, during the invasion of Naboo, he moved at such speeds aboard the Saak'ak that he was a complete blur), Massively Hypersonic+ combat speeds and reactions augmented by precognition (Has casually blocked a blast of Force lightning from Dooku using a lightsaber. Should be comparable to Kit Fisto) | Subsonic running speed with Force Speed, Massively Hypersonic+ combat speeds and reactions augmented by precognition (Comparable to Vader near his prime as well as Maul and Rebels Ahsoka) | Relativistic (Has moved at such speeds aboard the Invisible Hand and while attempting the Slip Jaws Maneuver and an overall superior Jedi to Jax Pavan, comparable to Bastila Shan). FTL reactions and combat speed (Deflected three Blaster bolts in a nanosecond[1])

Stamina: Very high (Can fight high-intensity battles for long periods of time without rest, and to boost it, his fighting style (Soresu) is very minimalist and energy-efficient)

Range: Extended melee range with a lightsaber. Tens of meters with Force powers. Interstellar with Force senses and telepathy (Was able to sense when Anakin had left the Teth planetary system. Sensed the destruction of Alderaan while in hyperspace from multiple light-years away) | Extended melee range with his lightsaber. Tens of kilometers with telekinesis (Should be comparable to other High Councillor level Jedi such as the likes of Saesee Tiin, who could telekinetically hurl B2 super battle droids up to 4 km away). Interstellar with telepathy and Force senses.

Intelligence: Gifted, Obi-Wan was a noted strategist and a high ranking general during the Clone Wars; extremely talented Jedi Master who taught Anakin and later Luke Skywalker, effective at military tactics and strategies and very skilled in lightsaber combat and mastery of the Force. Is regarded by Mace Windu as the Master of Soresu, the defensive form of lightsaber combat, and was unmatched by any in the order in his skill with the form (Possibly excluding Yoda). Is also a rather proficient practitioner of Ataru, Jar'kai (Dual Wielding), Niman and is likely at the very least competent in Djem So, Shii-Cho and Makashi, due to being connected to people who taught or mastered it, such as Qui Gon, Dooku and Anakin. Aside from his skill, and befitting his strategic and tactical prowess, he is also one of the most intelligent Jedi of the era in terms of utilizing the environment and finding unique solutions to problems. One example is when he cut off Grievous' hands by parrying his wrists rather than his blades. He is also skilled at finding weaknesses in technique, which combined with his defensive sword style proves to be useful when fighting opponents equal or superior to himself, such as when he used Anakin's arrogance to his own advantage by baiting him to make a ridiculous jump to his supposedly advantageous "high ground", or lured Darth Maul into using the exact same move he killed his master Qui-Gon Jinn in order to defeat him.

Qui-Gon Jinn (Star Wars) Jinn's profile (This was Kenobi in Revenge of the Sith, Legends versions of both characters)